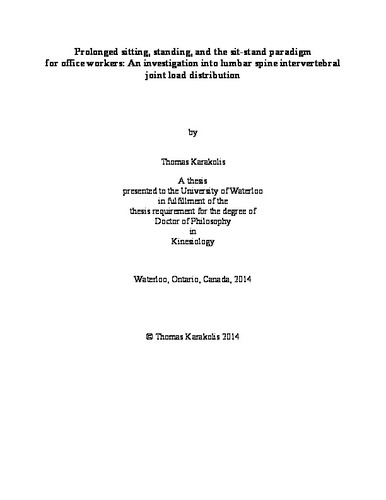 Over the past 20 years, sit-stand workstations have become more and more prevalent in the office work environment. A sit-stand workstation is any workstation that allows the user to perform their office work in either a seated or standing position with minimal disruption when switching between the two. This thesis explored the potential benefit of sit-stand workstations from a worker back discomfort and productivity perspective; however, the main goal of this thesis was to explore the potential benefit of sit-stand workstations with respect to low back injury prevention. A review of the current literature was conducted (Chapter 3). This review concluded that using a sit-stand workstation likely reduces worker discomfort and has a neutral impact on productivity. The review also found that there is little evidence on whether or not sit-stand workstations can reduce the risk of low back injury associated with prolonged sitting. The first experimental study (Chapter 4) in this thesis confirmed the potential of sit-stand workstations to reduce worker discomfort without reducing productivity. The first experimental study also found significantly different kinematics and kinetics while working in a sit only, stand only, and sit-stand paradigm. Sitting generally resulted in a more flexed lumbar spine compared to standing, with lower levels of compressive spine loading. The second experimental study (Chapter 5) explored the mechanical behaviour of annulus tissue from the intervertebral disc. An understanding of annulus tissue mechanical behaviour is a necessity when exploring potential injury pathways associated with prolonged sitting, standing, and the sit-stand paradigm. The second study found that annulus material properties varied by region of the annulus from which they were obtained. The study also found that when material testing annulus tissue, the means by which the boundary conditions were applied to the tissue affected the derived materials properties. This consequently affects how the annulus should be modeled numerically. Results of the second study were used to create a numerical model of the intervertebral disc that was used in the third study to further explore the potential benefits of sit-stand work from a low back injury prevention perspective. The third experimental study (Chapter 6) showed that working in a sit-stand paradigm has the potential to reduce peak strain in the intervertebral disc, thus reducing injury potential. Sit-stand work is likely beneficial from an injury perspective beyond just reducing the total time spent sitting throughout the workday.