The Dependence of Radio-Mode Feedback on Baryonic and Halo Mass 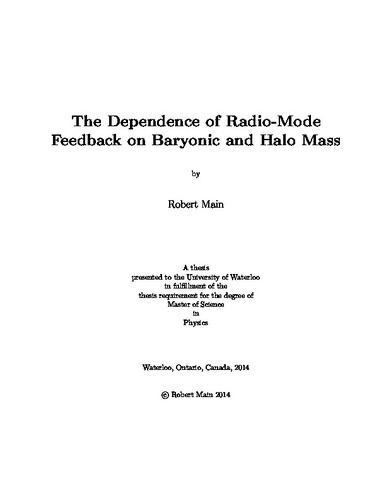 Supermassive black holes launch powerful radio-synchrotron jets into the hot atmospheres of galaxy clusters, creating bubbles of displaced gas and driving shock fronts. These jets output a tremendous amount of energy, preventing rapid cooling of the X-ray atmospheres, and suppressing star formation in massive galaxies. In this thesis I investigate the link between feedback from active galactic nuclei (AGN) and the large-scale properties of galaxy clusters. I begin by analysing the cluster scaling relations in systems experiencing radio-mode feedback. The sample comprises of 50 systems with X-ray cavities, including the 23 systems from the HIghest FLUx Galaxy Cluster Sample (HIFLUGCS) with X-ray cavities and central cooing times less than 1 Gyr. Using archival Chandra data, I derive mass profiles of both the total mass and gas mass for each cluster. I then determine the bolometric luminosity, temperature, halo mass, and gas mass within a self-similar radius. K-band magnitudes from the Two Micron All-Sky Survey (2MASS) are used to calculate the stellar mass of the brightest cluster galaxy (BCG). I fit the relationships between mass, temperature, and luminosity in our sample, compare them to the theoretical self-similar scalings, and to previous studies using the full cluster population. I also investigate the relationships between the mass in stars, gas, and dark matter. I attempt to answer if AGN feedback is responsible for the decrease in integrated star formation efficiency with mass, and if it is able to displace the missing gas in clusters. I then investigate how mechanical AGN power scales with cluster properties. I find a strong correlation between AGN power and halo mass, and find the relationship between AGN power and cluster luminosity is consistent with linear. I compare the relationship between AGN power and halo mass to an analytic model used in simulations, and I measure the accretion rate of AGN outbursts across our sample in an attempt to explain the differences between them. I address possible biases in the measured relationship between AGN power and halo mass, including spurious correlations caused by redshift, and bias caused by degeneracy between measurements of halo mass and AGN power. I look at the spread of cavity angular sizes with redshift, finding no redshift-dependent bias on measuring AGN power from X-ray cavities. I use radio luminosity as a proxy for AGN power that is not degenerate with halo mass, and again find that the mechanical power of AGN correlates strongly with cluster mass. Finally, I look at the effect of AGN heating in the full HIFLUGCS sample, which contains 64 systems. The luminosity of central radio sources is used as a proxy for mechanical AGN power, and the systems are sorted by the central cooling time of the intracluster medium (ICM). A clear separation is found in the relationship between AGN power and mass based on central cooling time, and I discuss this in the context of a feedback cycle. I find no separation in the relationship between halo mass and BCG stellar mass with central cooling time, indicating that cooling flows are balanced over long timescales. I calculate the energy per particle injected from individual AGN outbursts and discuss in context of the energy required to break self-similarity in clusters and groups.