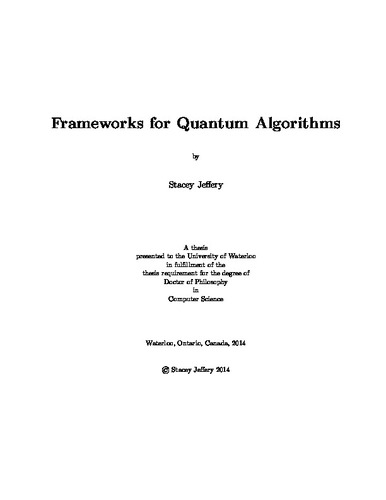 Due to the difficulty of constructing new quantum algorithms, frameworks that facilitate this construction are of great importance in quantum computing. These frameworks reduce the problem of coming up with a quantum algorithm to that of constructing some combinatorial object that is often much simpler to reason about. The implementation and analysis of an algorithm for the specified problem follow from the properties of this object. A number of such frameworks have been extremely successful in leading to the development of numerous quantum algorithms for a variety of problems. In this thesis, we build on two of these frameworks, the quantum walk search framework, and the span program framework, extending their algorithmic potential. The quantum walk search framework gives a generic quantum analogue to a specific type of classical algorithm based on random walks. If one can construct a classical algorithm of this form, a corresponding quantum algorithm with better complexity immediately follows. In this framework, a generic algorithm is constructed from several subroutines for which implementations must be given for each application. One of these subroutines, a checking subroutine, is run many times throughout the algorithm. This subroutine may be implemented by any quantum algorithm that satisfies the required functionality, including another quantum walk algorithm. By making a slight modification to the quantum walk framework, we can show how to nest a quantum walk algorithm in the checking subroutine of another quantum walk algorithm in a way that gives better complexity than the naive nesting. This modification allows us to reproduce a number of upper bounds previously obtained in another framework, the learning graph framework, including upper bounds for triangle finding, and more generally, subgraph finding for constant-sized subgraphs. Porting these upper bounds over to the setting of quantum walks is desirable because the algorithms achieved in the quantum walk search framework are much more explicit than those of the learning graph framework, making them easier to work with, modify, and build on, as needed. Our efficient nested checking idea has already been used to come up with new quantum algorithms for finding sub-hypergraphs. Another subroutine that is called repeatedly by the generic quantum walk search algorithm is the update subroutine. It was not clear how to use a quantum walk algorithm to perform this step, but by making another slight modification to the quantum walk search framework, we are able to show how to nest a quantum walk in the update step of another quantum walk in an efficient way. Our technique for doing this is a special case of a technique that allows the update to be implemented with garbage --- i.e., some unwanted data in an auxiliary register, entangled with the desired state. This technique may have other applications. Using the nested update technique, we are able to improve the best known upper bounds on the time complexity of $k$-distinctness. Previously the best known upper bound on the time complexity was $n^{k/(k+1)}$, due to Ambainis. Belovs had recently improved the query complexity of $k$-distinctness to $o(n^{3/4})$ for all $k$, but since this upper bound was obtained in a framework called span programs, which only gives upper bounds on quantum query complexity, there was no known time efficient implementation of his $k$-distinctness algorithm. We use ideas from his construction and our nested update technique to get a quantum time upper bound for $3$-distinctness of $n^{5/7}$, matching his quantum query upper bound. We can generalize our algorithm get a time upper bound of $n^{(k-1)/k}$ for any $k>3$, slightly improving on the best previous upper bound. Another framework, the span program framework, is known to be equivalent to quantum query complexity, in the sense that for any Boolean decision problem, there exists a span program construction that yields a tight upper bound on its quantum query complexity. We explore several variations of this framework. First, we slightly modify the definition of a span program so that we can show that for \emph{any} (not necessarily Boolean) decision problem, there is a span program construction that yields a tight upper bound on its quantum query complexity. Previously this was only known up to logarithmic factors. We also explore several approximate versions of span programs, and show them to be equivalent. Finally, we explore the structure of span program witnesses, and use this structure to present an algorithm for evaluating span programs that is straightforward and intuitive. We also show how to evaluate approximate span programs, opening the possibility for the construction of new upper bounds using approximate span programs.