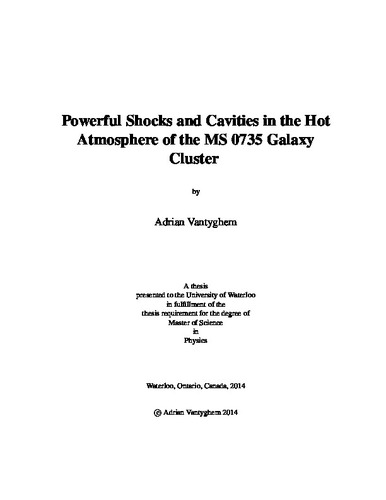 Cool core clusters host bright centres that radiate away their energy in less than 10^9 yr. If uncompensated by heating, the hot atmosphere will cool and form stars at rates of hundreds to thousands of solar masses per year. However, high resolution spectroscopy from the Chandra and XMM-Newton X-ray Observatories have failed to find evidence of gas cooling to low temperatures at the expected rates. Instead, feedback from active galactic nuclei (AGN) is heating the intracluster medium and suppressing cooling flows. X-ray observations have revealed large cavities, weak shocks, and sound waves in the intracluster medium that are produced by the relativistic jets launched by the central AGN. In this thesis I present a deep Chandra X-ray analysis of MS 0735.6+7421 (MS0735), the cool core galaxy cluster with the most energetic AGN outburst known. I use this deep observation to study the energetics of the powerful AGN outburst, as well as analyze additional effects that the outburst has on the intracluster medium. Two large cavities, with diameters of 200-240 kpc, are embedded in the hot atmosphere of MS0735. A power output of over 10^46 erg/s is required to inflate the bubbles, exceeding the X-ray luminosity by over a factor of 60 and easily offsetting radiative losses. A continuous, weak shock front of Mach number 1.26 encompasses the cavities, injecting energy at a rate comparable to the cavities. This shock causes a temperature jump that varies azimuthally, and is highest where the shock front is strongest. Cool gas from the centre of the cluster is entrained in the radio jet and is being dragged toward high altitudes. Two more cavities are observed near the cluster centre, indicating that the AGN is rejuvenating on a timescale shorter than the central cooling time. These cavities, while small compared to the older outburst, still contain ample energy to offset radiative losses. With the addition of MS0735, I prepare a sample of 10 clusters and groups with multiple generations of cavities. Three systems with detected sound waves are also included, two of which overlap with the cavity sample. In these systems I compare the mean time interval between AGN outbursts to the central cooling time and cavity heating time. On average the AGN rejuvenate on a timescale that is approximately 1/3 of their mean central cooling time, indicating that jet heating is outpacing cooling in these systems. Finally, I present a preliminary analysis of integral field spectroscopy of MS0735's brightest cluster galaxy. A velocity gradient extends across the cluster nucleus and is inconsistent with being a rotating disk. Instead, it is more likely that the atomic gas has been entrained in the jets and is being dragged away from the nucleus. The ionized gas mass exceeds estimates based on the upper limits of molecular gas, indicating either that the atomic gas is not condensing into molecular gas or that a source of heat is reionizing the H-alpha nebula.