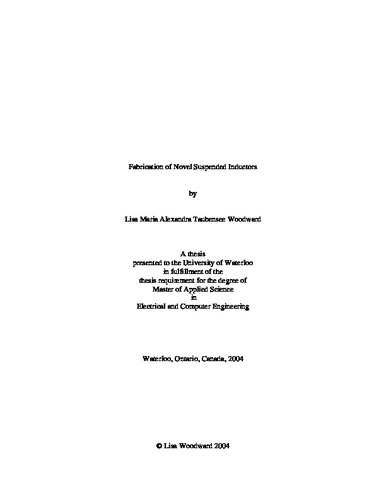 With the rapid growth in the wireless industry there has been increasing demand to make devices with better performance. This means lower power, lower voltage, smaller, and in general more efficient. This has lead to the interest in and necessity for good quality passive components. Good quality passive components make better filters, baluns, voltage controlled oscillators, and matching networks. There has been a lot of work over the last ten years focused on improving the quality of inductors. Typical inductors fabricated on silicon have Q factors of approximately 10. This is because silicon is conductive and therefore acts like a lossy ground plane and develops interfering currents. Improvements that have been attempted include thicker metal layers, thicker dielectric layers, patterned ground shields, as well as using multiple metal layers. These methods, however, still do not improve inductors to the quality of those built on insulating substrates such as glass. The main successful attempt on silicon has been where the inductor coil is released so that it is in the air supported by posts. In some work the inductor coil is raised 50 to 100µm above the underpass by methods like etching or photoresist molding. The suspended inductor approach was applied to an insulating substrate to fabricate and characterize unique suspended inductors and transformers. Inductors were released to have 1µm of air underneath the coil by the use of a release etch. Transformers were made in a similar way except two released layers where used. The top coil, done in plated gold, was released as well as an interconnection layer. Such a small air gap and the transformers with two released metal layers are a couple of the unique features of this thesis work. The devices were characterized up to 20GHz before and after release. An improvement in the peak Q factor (up to 70), as well as in the self-resonance frequency (up to 4GHz higher) was noticed after release. This is expected due to the reduction in parasitics. The results were then compared with simulations and a couple closed form expressions, both of which were able to give a reasonable accuracy. There was also success in getting good high frequency transformers. Even though some good high-Q inductors were fabricated as part of this thesis, there is still further work that can be done. This includes packaging, integration with capacitors, and further optimization.