Men against Power: Antistatism, Grassroots Organizing, and the Vietnam Veterans Against the War 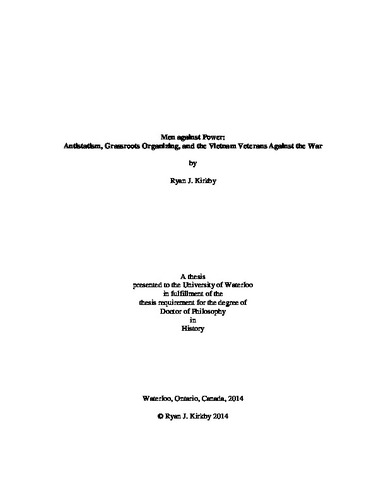 This dissertation examines the history of the Vietnam Veterans Against the War (VVAW) from its founding in 1967 through to the early 2000s. Whereas past scholars have interpreted VVAW’s activism as motivated by the therapeutic promises of protest, disenchantment with U.S. foreign policy, and reverence for the peace and justice movements of the 1960s, the present analysis situates VVAW in the context of the larger antistatist movement that emerged during the unraveling of liberalism in the late 1960s and early 1970s. It argues that VVAW’s activism, in addition to its clear antiwar purpose, represented an antistatist response to the top-down, technocratic features of the postwar liberal state. In doing so, it has three aims. First, it seeks to revive scholarly consideration of VVAW, an organization that is well known but has generated surprisingly little attention from historians since the late 1990s and early 2000s. Second, and equally important, it purposes a new perspective for understanding the postwar period, one that reinterprets sixties activism as part of a longstanding dialogue in American history regarding the limits of state power in an increasingly centralized system. Finally, this study projects a view of sixties protest that transcends simplistic categorizations of “liberal” and “radical,” as well as “left” and “right,” in order to draw out the cross-pollinating tendencies that existed between the postwar state’s various critics, not least their mutual appeals for greater community control and decentralized ways of organizing.