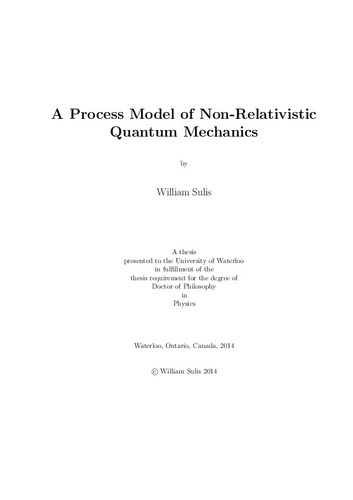 A process model of quantum mechanics utilizes a combinatorial game to generate a discrete and finite causal space upon which can be defined a self-consistent quantum mechanics. An emergent space-time and continuous wave function arise through a uniform interpolation process. Standard non-relativistic quantum mechanics (at least for integer spin particles) emerges under the limit of infinite information (the causal space grows to infinity) and infinitesimal scale (the separation between points goes to zero). This model is quasi-local, discontinuous, and quasi-non-contextual. The bridge between process and wave function is through the process covering map, which reveals that the standard wave function formalism lacks important dynamical information related to the generation of the causal space. Reformulating several classical conundrums such as wave particle duality, Schrodinger's cat, hidden variable results, the model offers potential resolutions to all, while retaining a high degree of locality and contextuality at the local level, yet nonlocality and contextuality at the emergent level. The model remains computationally powerful.