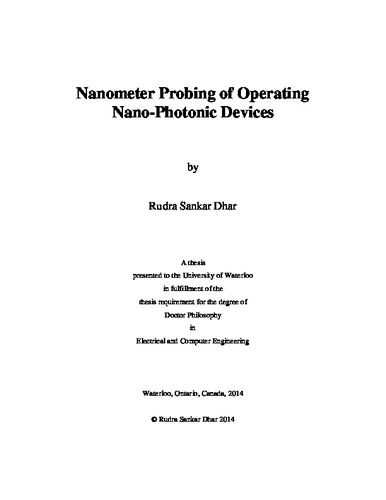 The external performance of quantum optoelectronic devices is governed by the three-dimensional profiles of electric potentials determined by the distribution of charge carriers (electrons and holes) within the active regions of the devices. Charge carrier dynamics play a vital role in active photonic quantum/nano devices, such as electrically-pumped semiconductor lasers. As an example, in quantum cascade lasers (QCLs) the Electric Field Domain (EFD) hypothesis posits that the potential distribution might be simultaneously spatially non-uniform and temporally unstable. Until now, there are no experimental means of probing the inner potential profile directly and as a result the mechanisms responsible for sub-par device performance of QCLs remain the subject of speculation. Another example is interband cascade lasers (ICLs), in which the distribution of gain-providing charge carrier governs the operation and performance of the devices, but has not been experimentally measured prior to this study. This work presents a systematic experimental study of gain-providing charge carrier distribution in a lasing interband cascade laser and electric potential distribution in THz QCLs. The unique charge carrier distribution profile in the quantum-well active region is quantitatively measured at nanometer scales by using the non-invasive scanning voltage microscopy (SVM) technique. Experimental results clearly confirm the accumulation and spatial segregation of holes and electrons in the core of the ICL device. The measurement also shows that the charge carrier density is essentially clamped in the presence of stimulated emission in ICLs, thus conclusively differentiating the lasing from non-lasing devices. The SVM technique has been applied to lasing THz QCLs to verify the hypothesis of electric field domains in semiconductor quantum structures. The experimental results reveal that the multi-quantum-well active region is divided into multiple sections having distinctly different electric fields. The electric field across these serially-stacked quantum cascade modules are observed not to continuously increase in proportion to the gradual increase of the applied device bias, but rather jumps between discrete values related to tunneling resonances. Also in the THz QCLs the progression of the observed EFDs are carefully probed. Experimental evidences reveal that an incremental change in device bias leads to a hopping-style shift in the EFD boundary – the higher electric field domain expands at least one module each step at the expense of the lower field domain within the active region. The SVM findings in THz QCLs indicate the importance of quantum active region design for intrinsically more uniform and stable electric field profiles. The two showcase study examples demonstrate that the cryogenic-temperature SVM is an enabling technique, being able to measure and resolve nanometer scale features non-destructively on operating devices. This experimental approach allows directly mapping the electric field distribution as well as the charge carrier distribution inside operating semiconductor quantum devices at nanometer scales, thus connecting the inner workings with the external measures of the devices. The experimental approach is expected to facilitate a deeper understanding of fundamental processes that are governing the operation and performance of a wide range of nanoelectronic and nanophotonic devices.