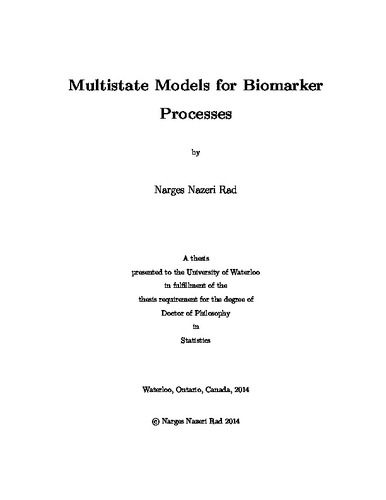 Multistate models are widely used for describing life history processes. In studies where individuals are observed continuously, the transition times between states are known exactly. However, when individuals are observed intermittently, transition times and even the states visited between successive observations, may be unknown. Irregular intermittent observation is a special case of intermittent observation where the observation times vary across individuals. In the case of intermittent observation, we may not be able to estimate model parameters precisely. In the first part of the thesis, we review methods of estimation for Markov models in this situation, and provide a numerical study that shows the loss of efficiency in estimation for intermittent observation compared to continuous observation in both progressive and bi-directional multistate models. Then, application to data from the CANOC, Canadian Observational Cohort study of HIV-positive individuals whose virus has been suppressed by combination antiretroviral therapy, illustrates the effect of gap times on estimation efficiency. Irregular observation is very common in longitudinal data on disease history of individuals in observational studies. However, there are considerable challenges in checking models with these observation schemes, since there is a strong possibility that this irregularity may be induced by the dependency of inter-visit times on previous process history. As a result, followup visits from this kind of data are subject to disease state-dependency, which needs to be taken into account to prevent biased analysis. The second part of this thesis begins with a review on the estimation of marginal process features such as failure time distributions and prevalence probabilities in the context of Markov multistate models with intermittent observations. A method for estimation of these features is developed using Inverse Intensity Weights (IIW). This method corrects the estimation bias due to dependent observation times. Simulation studies illustrate that the proposed method yields estimates that are close to the true values, while the method that ignores the dependency yields estimates that differ substantially from the true values. Then, an application involving viral load dynamics in a group of individuals from the CANOC study is presented. In practice, we may want to consider models for which transition intensities depend on internal covariates related to previous process history. There are, however, challenges in fitting and checking models involving internal covariates, and in making predictions. In the third part of this thesis, we have developed an algorithm that simulates possible sample paths of individuals' processes, and we use it for prediction and model checking. Finally, there has been recent discussion of model assessment of multistate models. There remain, however, some difficulties in model assessment with irregular intermittent observations. The last part of this thesis addresses problems that arise with methods based on comparison of empirical and model-based estimates. We propose the use of likelihood ratio tests within the Markov process family, and methods of estimating the power of these tests are given. We also propose a method for comparing models based on different outcome spaces in terms of prediction. Finally, the proposed methods are applied to a group of individuals in the CANOC study.