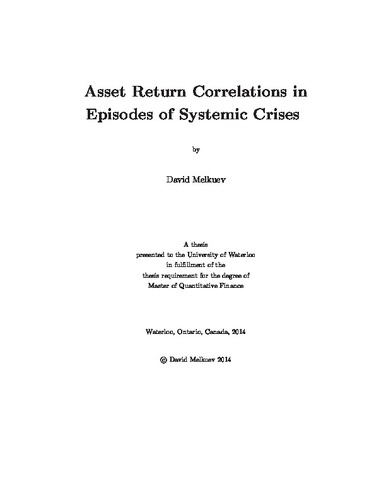 This thesis explores asset return correlation dynamics in relation to systemic crises. The eigenvalues obtained from principal component analysis performed on the sample return correlation matrix equal the variance explained by their associated eigenvectors. Also referred to as the absorption ratio in extant literature, the proportion of total system variance captured by a relatively small number of principal components reflects the strength of co-movement in the system. As a stylized fact of financial returns, increasing correlation is known to coincide with or follow significant market drawdowns. However, studies in recent years have suggested that contagion is facilitated by a state of high interconnectedness which precedes systemic crises. We study the association between changes in the absorption ratio and aggregate market returns in the context of three crisis episodes. Time series of the normalized eigenvalue estimates reveal that the structure of return correlations is richly dynamic across various asset groups. Using linear regression models, we find that systemic crises are characterized by a general breakdown of the correlation structure rather than increased co-movement. In addition, we find that changes in the normalized eigenvalues of the correlation matrix do not have consistent predictive power for market returns or volatility. Evidence for the relationship is stronger on a contemporaneous and lagging basis. Particularly, changes in correlation are significantly related to realized returns and volatility in the same period, for different period lengths. In general, realized volatility has a more robust relationship with shifts in the correlation structure than returns. We also use a nonparametric technique to monitor divergence in the distributions underlying successive observations of the normalized dominant eigenvalue. Periods of high divergence imply a change in the correlation structure and are found to either precede or coincide with systemic shocks.