Getting into the Game: The Precursors of Immersion into Violent Video Games and the Effect of Immersion on Post-Game Aggression 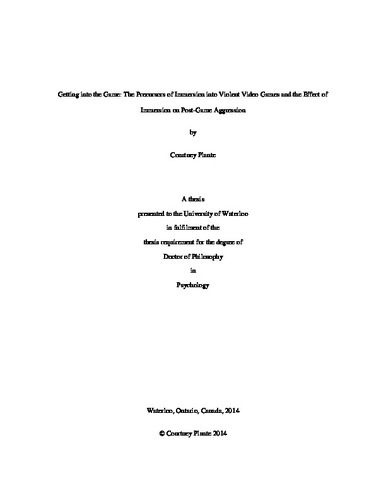 The hours many of us spend watching movies and television, playing video games, and reading books illustrate the prevalence of fantasy in our lives. But does spending so much time in fantasy worlds shape our real-world thoughts and behaviour and, if so, how? The present research tests the idea that the extent to which people become immersed into a fantasy activity – projecting themselves into the fantasy and experiencing it as if it were real – or distances themselves from a fantasy experience - reflecting on the fantasy from an outsider’s perspective - determines whether the experience influences their subsequent thoughts and behaviour. I begin with an overview of several lines of research, including the broader literature on the psychology of fantasy, theory and research on self-immersion and self-distancing processes, and research on the effects of playing violent video games on real-world aggression. Building on this work, I develop several novel hypotheses. First, I hypothesize that greater prior experience with a fantasy activity should be associated with more immersion into that activity and with expressing more fantasy-congruent behaviour after engaging in that activity. Second, I hypothesize that immersion should mediate the relationship between prior fantasy activity experience and behavioural effects of engaging in fantasy. Finally, I hypothesize that immersion into a fantasy activity can be experimentally manipulated to test its causal influence on post-fantasy behaviour. In Study 1 I test these hypotheses by measuring violent videogame experience, experimentally manipulating the visual perspective from which players experience a violent video game, and testing the effects of these variables on participants’ immersion into the game and their post-game behavioural aggression. I found that immersion into a violent video game significantly mediates the relationship between prior experience with video games and post-game behavioural aggression. However, visual perspective was an ineffective manipulation of immersion. In Study 2 I conducted an online study which aimed to replicate the results of the first study while attempting to manipulate player immersion through a set of immersing or control instructions. The results replicated the first study, with immersion again mediating the relationship between prior video game experience and post-game aggression, but again the manipulation of immersion was ineffective. In Study 3 I used a different approach to manipulate immersion that involved manipulating the game’s context to be either fantasy-themed or mundane-themed, which was predicted to be particularly immersive and distancing, respectively, for participants who chronically seek out fantasy-themed activities. This manipulation was partially effective, insofar as those who chronically engaged in fantasy-themed activities reported significantly greater immersion into the game and also behaved more aggressively after playing the fantasy-themed game (vs. the mundane-themed game). Furthermore, for these participants the effect of condition on immersion mediated the effects of condition on post-game aggressive behaviour. Taken together, these studies provide the first evidence that immersion into a fantasy activity predicts the extent to which the content of that fantasy affects actual behaviour. Finally, I discuss the theoretical and practical implications of this research, as well as some of its limitations and future directions.

Courtney Plante (2014). Getting into the Game: The Precursors of Immersion into Violent Video Games and the Effect of Immersion on Post-Game Aggression. UWSpace. http://hdl.handle.net/10012/8681