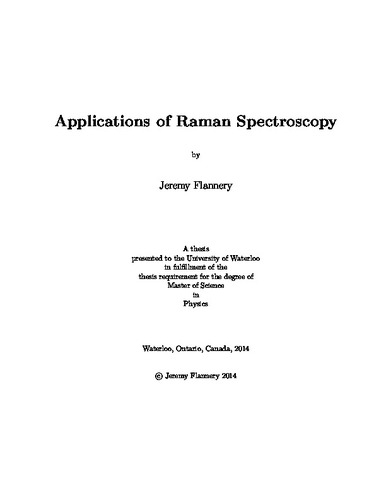 This thesis is devoted to exploring experimental applications of Raman spectroscopy. The ability of Raman spectroscopy to investigate the vibrational modes of a molecule was explored in several studies. The work included using Raman spectroscopy to examine the molecular configuration of proteins, the relative amounts of certain molecules present in a nanoporous material, the enhanced scattering properties of nano-structures and finding the local temperature of nanowire materials. The primary research project presented in this thesis focused on determining the structural conformation of lysozyme in a variety of contact lens solutions and the relation to its functionality. Protein activity was established by the use of micrococcal assays. The two multipurpose solutions tested, BioTrue and ReNu, as well as a neutralized hydrogen peroxide solution, ClearCare, showed no indications of major structural alterations in the lysozyme when exposed to the separate solutions. The assay experimental data indicated a consistently high protein activity during exposure to the various solutions. Both the data indicating a native structural conformation and high degree functionality result in the conclusion that the multipurpose solutions do not denature lysozyme during a regular cleaning cycle. The non-neutralized ClearCare and the other hydrogen peroxide solution, UltraCare (both neutralized and non-neutralized), demonstrated signs of lysozyme denaturation within a time period of a typical cleaning cycle, due to structural changes to the protein. How- ever, the functionality of non-neutralized UltraCare and ClearCare (by the micrococcal assay) were both found to remain relatively high, seemingly contradicting the structural indications of denaturation. This discrepancy between the structure and function of the proteins may be attributed to the irreversible process of aggregation that occurs at the high concentrations of protein which are require to produce a strong Raman signal. How- ever, the relatively lower concentration of lysozyme used in the assay experiments better reflect the true amounts found in the tear film. Thus, the conclusion can be made that if lysozyme is denatured by the majority of the solutions, they are only reversibly denatured, posing minimal risks when reintroduced back into the eye. The only contact lens solution that may pose the potential for inducing an inflammatory response to permanently denatured lysozyme is following exposure to neutralized UltraCare. The exact reason for this permanent denaturation seems to be from the components of the neutralizing tablet, but this requires further investigation. Raman spectroscopy was also employed in several additional research projects for other graduate groups. The first side project involved the use of heptane to wash away only iii the low Mw polystyrene molecules in blend samples of high and low Mw to produce a nanoporous material. The efficiency of this process was determined by deuterating the high Mw, which shifts certain characteristic spectral peaks creating distinct Raman signatures for each component. The relative amounts of the different Mw polystyrene molecules was measured by comparing the intensities of these corresponding shifted spectral peaks. The heptane washing procedure is almost perfectly efficient for percentages of < 30% low Mw. However, this technique loses all dissolving ability for percentages < 10% low Mw. Another side project presented in this thesis was the examination of Raman signal enhancing effects for graphene on different silver nano-structures. The two types of nano- structures studied were a ring and crescent pattern with varying dimensional sizes. The greatest enhancement of the graphene Raman peaks achieved was due to a crescent shaped structure producing an increase in Raman signal by a factor of 890. These results were also compliant with the theoretical model of the enhanced electric field localized at the nano-structures. The last research project involved using Raman spectroscopy to investigate any changes occurring with changing the temperature of GaAs nanowires. The heating effect caused by the incoming excitation radiation was studied by using the spectral shifts of the characteristic TO and LO peaks of GaAs nanowires to calculate the local temperatures of the samples. A variety of diameters of the etched GaAs nanowires was tested and the optimal heating occurred by a resonance effect at a diameter of 95 nm. These findings suggest that the particular wavelength of the incident radiation source corresponds to a specific nanowire size in which this photo-thermal heating effect is maximized.