Unrechtsstaat or “Normal” State? Authenticity and the Portrayal of the German Democratic Republic on Film 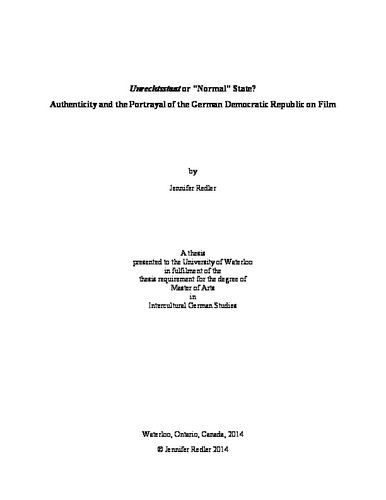 This thesis investigates how the display of authenticity in Wolfgang Becker’s 2003 film Good Bye, Lenin! and Florian Henckel von Donnersmarck’s 2006 film Das Leben der Anderen provides a common basis for accepting both films as critical engagements with the historical legacy of the German Democratic Republic (GDR). This thesis first outlines the historical discourses that dominated post-1989 discussions of the GDR, namely the competing notions of Ostalgie and the GDR as an Unrechtsstaat. The genre of historical film is then examined with regard to the role authenticity plays in the portrayal of historical events on the screen. It is argued that as historical films, Good Bye, Lenin! and Das Leben der Anderen present the individual at the centre of recent events in order to convey a more personalized and condensed version of complex historical processes. The main protagonist in Good Bye, Lenin!, Alex Kerner, by nostalgically holding on to and recreating the GDR Alltag displays historical authenticity since his life experiences correspond to Ostalgie. He represents the struggles of an Eastern population coming to terms with the changes brought on by the Wende. In Das Leben der Anderen, the dedicated Stasi interrogator Captain Gerd Wiesler is similarly authentic: his character’s actions underscore the terrifying way in which the Stasi dealt with those it considered to be the enemies of socialism, thereby supporting the view of the GDR as an Unrechtsstaat. Ultimately, by analyzing specific sequences within each film, this thesis demonstrates that the films do not merely present the GDR past as an Alltag or Unrechtsstaat; rather, because their display of authenticity is integral to their presentation of history, these films can influence the general public’s views of GDR history in ways not available to traditional historiography.

Jennifer Redler (2014). Unrechtsstaat or “Normal” State? Authenticity and the Portrayal of the German Democratic Republic on Film. UWSpace. http://hdl.handle.net/10012/8677