What is the Function of Post-Event Processing in Social Anxiety Disorder? The Role of Metacognitive Beliefs, Memory Uncertainty and Perception of Performance 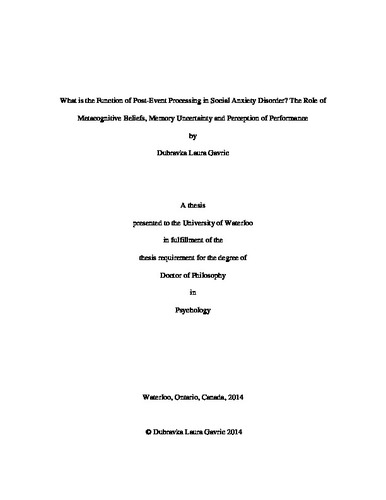 Post-event processing (PEP) can serve to maintain and worsen anxiety symptoms and negative interpretations of social events in Social Anxiety Disorder (SAD; e.g., Cody & Teachman, 2010, 2011). However, little is known about the specific factors that might motivate individuals to engage in PEP. The aim of the current research was to investigate a novel theoretical framework in which positive metacognitive beliefs about the value of engaging in PEP, memory uncertainty, and perceptions of performance were hypothesized to contribute to the persistence of PEP among socially anxious individuals, and ultimately lead to more negatively biased recollections of past social events. A Pilot Study provided preliminary correlational evidence that social anxiety is related to both metacognitive beliefs and uncertainty for social events. Study 1 was designed to examine these constructs in the laboratory following a standardized social task among individuals with a diagnosis of SAD in comparison to anxious and healthy control participants. Results showed that relative to both control groups, individuals with SAD reported greater PEP in the days following the social task. Participants with SAD also rated their performance more negatively and felt greater uncertainty immediately after the task, although these ratings did not become worse over time. They also endorsed more metacognitive beliefs about the benefits of reviewing the social task. Importantly, bootstrapping mediation analyses suggested that both metacognitive beliefs and initial performance ratings significantly mediated the relationship between group status and PEP in the days following the event. Study 2 was an experimental study designed to investigate how repeatedly recalling a socially-relevant versus socially-irrelevant task would impact performance and certainty ratings. It was expected that recollection of a socially threatening event would lead to an increased level of certainty at the expense of increasingly negative evaluations, although these hypotheses were not supported. Idiosyncratic metacognitive beliefs were also explored and findings suggested that socially anxious individuals reported both perceived advantages and disadvantages to mentally reviewing the socially-relevant task. The results of these studies are discussed in the context of theoretical implications and in relation to the studies’ clinical applications in the treatment of SAD.

Dubravka Gavric (2014). What is the Function of Post-Event Processing in Social Anxiety Disorder? The Role of Metacognitive Beliefs, Memory Uncertainty and Perception of Performance. UWSpace. http://hdl.handle.net/10012/8675