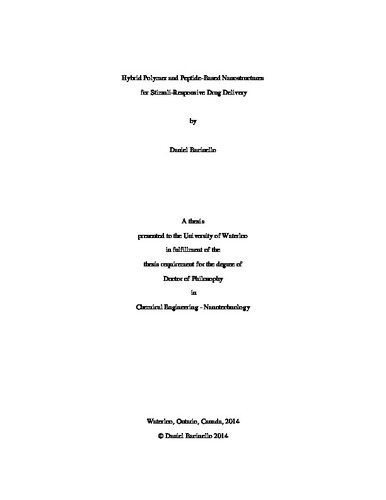 Targeting of human tissues by nanomedicines can occur both passively, benefiting from the enhanced permeation and retention (EPR) effect, and actively, through design elements which exploit the unique microenvironment (pH, redox environment, enzymatic expression etc...) of specific tissues. In this study novel drug delivery systems (DDS) are designed to exploit the enzymatic and pH environments of human tissues. Specifically, the enzymes matrix metalloproteinase (MMP) 2 and 9 are known to be associated strongly with aggressively invasive cancer and are expressed in very high levels in tumour tissues. These highly studied enzymes have been shown to selectively cleave the peptide sequence PVGLIG. In addition, the pH in different organs and cells in the human body can vary significantly creating opportunity to trigger pH-sensitive systems. The peptide PVGLIG, which is known to be selectively cleaved by the tumor-associated enzyme matrix metalloproteinase-2 (MMP-2), was conjugated to α-alkene poly(trimethylene carbonate) (PTMC) blocks of varying sizes via UV-initiated thiol-ene “click” chemistry. The PTMC precursor was synthesized by metal-free ring-opening polymerization using allyl alcohol as an initiator and an N-heterocyclic carbene as an organic catalyst. The unprecedented PVGLIG-b-PTMCn hybrids were self-assembled in aqueous solution and various sub-micron sized morphologies obtained by a nanoprecipitation process. Characterization of particle morphology was carried out by multi-angle dynamic light scattering (DLS) and static light scattering (SLS) evidencing spherical nanoparticles with different morphologies and narrow size distributions. Microstructure details were also observed on transmission electron micrographs and were in good agreement with light scattering measurements showing the assembly of core-shell, large compound micelles and vesicle morphologies, the particle morphology varying with the hydrophilic weight fractions (ƒ) of the hybrids. These nanostructures displayed selective degradation in the presence of the cancer-associated enzyme MMP-2, as probed by the morphological change both by TEM and DLS. All these results demonstrated that PVGLIG-b-PTMC hybrids were suitable to target the tumor microenvironment. The synthetic strategy developed for production of PTMCn-b-PVGLIG diblock systems was then expanded for the synthesis of multi-functional a triblock copolymer. The synthetic semi-crystalline polymer PTMC50 was conjugated to the synthetic poly(amino acid) poly(glutamic acid) (PGA) using the peptide PVGLIG as a linker by a combination of UV-initiated thiol-ene coupling and ROP. Stable, monodispersed, sub-micron sized polymersomes were subsequently obtained by self-assembly and characterized by dynamic and static light scattering (DLS and SLS) and TEM. These vesicles showed selective degradation in the presence of MMP-2 as probed by DLS. The model drug imipramine hydrochloride was loaded at 35 % encapsulation efficiency by co-precipitation and displayed a controlled drug-behaviour.. Drug release rates from these vesicles showed several fold increases when exposed to pH, temperature and most significantly, the tumor-associated enzyme MMP-2. Such structures may hold promise as future specific and controlled drug-delivery systems. Control of membrane integrity is a key factor in producing stable particles for drug delivery. PTMC50-b-PVGLIG-b-PGA15 nano-vesicles were subjected to multiple rounds of heating and cooling in order to probe the effect of membrane melting on the structure and stability of the vesicles. Vesicles are observed to undergo a chain-melting transition resulting in significant size and morphology changes when heated above the melting temperature of the PTMC block for extended periods. This morphology change is linked to increases in the structure melting temperature and molar melting enthalpy towards that of the bulk material. This increase is suggestive of a higher degree of crystallinity attained in larger vesicles.. Towards a better understanding of how the drug-carrier relationship impacts encapsulation and release, isothermal titration calorimetry (ITC) was used to probe the chemical interactions between two model drugs and a polymersome carrier. The amphiphilic copolymer PTMC30-b-PGA13 was synthesized using a chemical platform previously established based on a combination of organo-catalyzed ring-opening polymerization (ROP) and UV-initiated thiol-ene coupling. The copolymer was self-assembled using a nanoprecipitation technique to form stable polymersomes with low PDI. Procaine hydrochloride (PrHy) or imipramine hydrochloride (IMI) was loaded into the vesicles as model drugs by co-precipitation. The loading of these drugs and release from the vesicles was monitored used drug-selective electrodes at pH 7.4 and 4.5. The significant differences in the loading and release of the two drugs from the vesicle carrier correlates well with the drug-carrier interactions probed by ITC. High intensity interaction was clearly linked with a higher drug loading capacity and a slower drug release rate. The drug-carrier interaction was monitored by ITC at pH 9.5, 7.4 and 4.5 and was in good agreement with the observed loading and release rates.