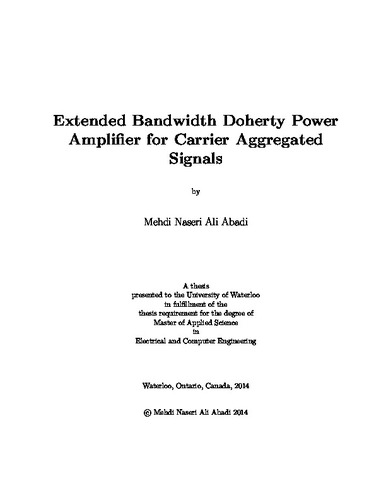 In the conventional classes of power amplifiers the efficiency drops at power back-off, whereas in order to maximize the spectral efficiency and data rate, wireless communication standards employ signals with high peak to average power ratio. This results in low average efficiency for power amplifiers, which in turn results in heavy cooling requirements and damage to the environment. To improve the low back-off efficiency Doherty technique has been widely investigated. But, the conventional Doherty power amplifiers are fairly narrowband, while modern transmitters are needed to support multiple standards and operate at multiple frequency bands. This thesis proposes two novel output combiners for Doherty power amplifiers with extended bandwidth. It will be shown analytically how the problem of wideband Doherty can be converted into an impedance synthesization problem. Then two networks to synthesize the desired impedance are proposed. To achieve the proper load modulation over a wide bandwidth, the first proposed combiner employs a quarter-wave short-circuited stub at the output of the peaking transistor and the second proposed combiner uses a parallel LC tank at the same node. In addition to inherent wideband characteristics, the proposed Doherty output combiners have three other important benefits. First, they present small low-frequency impedance for both the main and peaking transistors, which results in improved linearity and linearizability when the amplifier is concurrently driven with multi-band modulated signals. Second, the new combiners result in smaller group delay variation across the band compared to the conventional Doherty amplifier, which results in improved linearizability when the amplifier is driven with extra wideband modulated signals. Finally, the output capacitance of the peaking transistor can be easily absorbed into the combiners without compromising the performance of the amplifier. The thesis starts with an overview of the Doherty power amplifier principles and provides a bandwidth analysis for the conventional Doherty power amplifier. Then it continues with the new approach to extend the bandwidth of Doherty amplifiers with respect to requirements of multi-band transmission. Based on the proposed combiners, two Gallium Nitride 20 W Doherty power amplifiers have been designed and fabricated. The measurement results have been provided to validate the developed theory. The first amplifier covers 1.72 to 2.27 GHz and the second one covers 700 to 950 MHz and both maintain higher than 48 % of drain efficiency at 6 dB back-off across the band. The two amplifiers are successfully linearized when driven with carrier aggregated modulated signals.