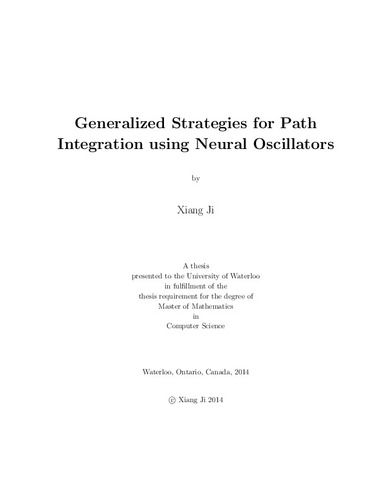 Path integration is a process by which an animal obtains its location by integrating its velocity over time. Evidence shows that path integration may contribute to certain neural activity patterns in the entorhinal cortex and the hippocampus, which probably serves important function in the animal's navigation system. Such neurons include place cells, firing only when the animal is at a certain region of the environment, and grid cells, which fire when the animal is at locations organized in a hexagonal grid pattern. Various models try to explain the neural mechanism of path integration and how the path integration system serves as the input to grid cells and place cells. Among the best results is the one given by our previous work. The model links Welday et al.'s bank-of-oscillators model with Fourier theory, implements path integration with spiking leaky integrate-and-fire (LIF) neurons, and generates neurons with the desired activity patterns. However, the model depends on a regular placement of its parts. We extend our previous work into a generalized framework by allowing arbitrary placement and introducing a coupling approach that employs an iterative least-squares method. We build a neural network under the new framework with LIF neurons, conduct experiments with various parameter combinations, and evaluate the network's performance with new quantitative measures. Results show clear trends of the performance varying with some of the parameters, which may shed some light on the direction to a more effective path integration system.