A Comprehensive Analysis of Lift-and-Project Methods for Combinatorial Optimization 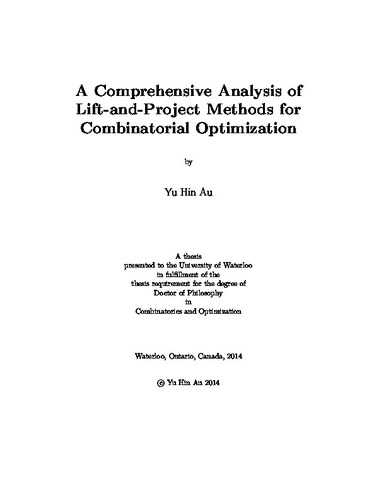 In both mathematical research and real-life, we often encounter problems that can be framed as finding the best solution among a collection of discrete choices. Many of these problems, on which an exhaustive search in the solution space is impractical or even infeasible, belong to the area of combinatorial optimization, a lively branch of discrete mathematics that has seen tremendous development over the last half century. It uses tools in areas such as combinatorics, mathematical modelling and graph theory to tackle these problems, and has deep connections with related subjects such as theoretical computer science, operations research, and industrial engineering. While elegant and efficient algorithms have been found for many problems in combinatorial optimization, the area is also filled with difficult problems that are unlikely to be solvable in polynomial time (assuming the widely believed conjecture $\mathcal{P} \neq \mathcal{NP}$). A common approach of tackling these hard problems is to formulate them as integer programs (which themselves are hard to solve), and then approximate their feasible regions using sets that are easier to describe and optimize over. Two of the most prominent mathematical models that are used to obtain these approximations are linear programs (LPs) and semidefinite programs (SDPs). The study of these relaxations started to gain popularity during the 1960's for LPs and mid-1990's for SDPs, and in many cases have led to the invention of strong approximation algorithms for the underlying hard problems. On the other hand, sometimes the analysis of these relaxations can lead to the conclusion that a certain problem cannot be well approximated by a wide class of LPs or SDPs. These negative results can also be valuable, as they might provide insights into what makes the problem difficult, which can guide our future attempts of attacking the problem. One mathematical framework that generates strong LP and SDP relaxations for integer programs is lift-and-project methods. Among many attractive features, an important advantage of this approach is that tighter relaxations can often be obtained without sacrificing polynomial-time solvability. Also, these procedures are able to generate relaxations systematically, without relying on problem-specific observations. Thus, they can be applied to improve any given relaxation. In the past two decades, lift-and-project methods have garnered a lot of research attention. Many operators under this approach have been proposed, most notably those by Sherali and Adams; Lov{\'a}sz and Schrijver; Balas, Ceria and Cornu{\'e}jols; Lasserre; and Bienstock and Zuckerberg. These operators vary greatly both in strength and complexity, and their performances and limitations on many optimization problems have been extensively studied, with the exception of the Bienstock--Zuckerberg operator (and to a lesser degree, the Lasserre operator) in terms of limitations. In this thesis, we aim to provide a comprehensive analysis of the existing lift and project operators, as well as many new variants of these operators that we propose in our work. Our new operators fill the spectrum of lift-and-project operators in a way which makes all of them more transparent, easier to relate to each other, and easier to analyze. We provide new techniques to analyze the worst-case performances as well as relative strengths of these operators in a unified way. In particular, using the new techniques and a recent result of Mathieu and Sinclair, we prove that the polyhedral Bienstock--Zuckerberg operator requires at least $\sqrt{2n}- \frac{3}{2}$ iterations to compute the matching polytope of the $(2n+1)$-clique. We further prove that the operator requires approximately $\frac{n}{2}$ iterations to reach the stable set polytope of the $n$-clique, if we start with the fractional stable set polytope. Moreover, we obtained an example in which the Bienstock--Zuckerberg operator with positive semidefiniteness requires $\Omega(n^{1/4})$ iterations to compute the integer hull of a set contained in $[0,1]^n$. These examples provide the first known instances where the Bienstock--Zuckerberg operators require more than a constant number of iterations to return the integer hull of a given relaxation. In addition to relating the performances of various lift-and-project methods and providing results for specific operators and problems, we provide some general techniques that can be useful in producing and verifying certificates for lift-and-project relaxations. These tools can significantly simply the task of obtaining hardness results for relaxations that have certain desirable properties. Finally, we characterize some sets on which one of the strongest variants of the Sherali--Adams operator with positive semidefinite strengthenings does not perform better than Lov\'{a}sz and Schrijver's weakest polyhedral operator, providing examples where even imposing a very strong positive semidefiniteness constraint does not generate any additional cuts. We then prove that some of the worst-case instances for many known lift-and-project operators are also bad instances for this significantly strengthened version of the Sherali--Adams operator, as well as the Lasserre operator. We also discuss how the techniques we presented in our analysis can be applied to obtain the integrality gaps of convex relaxations.