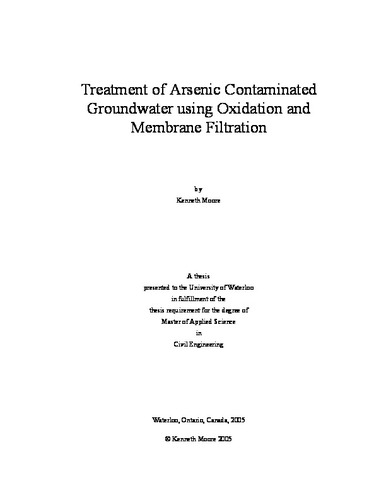 Arsenic is a known carcinogen, causing cancers of the skin, lungs, bladder and kidney. Current research suggests that drinking water is the most common pathway for long-term low dose exposure. Arsenic contaminated drinking water has caused serious health problems in many countries including: India, Bangladesh, Argentina, Chile, Taiwan, the United States and Canada. Nanofiltration (NF) is a promising technology for arsenic removal since it requires less energy than traditional reverse osmosis membranes. Several studies have shown that nanofiltration is capable of removing the oxidized form of arsenic [As(V)] while the reduced form of arsenic [As(III)] is poorly removed. To exploit this difference it has been suggested that a pretreatment step which oxidizes the As(III) to As(V) would improve the performance of membrane filtration, but this has never been demonstrated. The research had three objectives: The first was to investigate the ability of NF membranes to treat arsenic contaminated groundwater and evaluate the influence of the membrane type and operating conditions. Secondly, the effectiveness of a solid phase oxidizing media (MnO2) to oxidize arsenite to arsenate was investigated. Lastly, the MnO2 was combined with NF membrane filtration to determine the benefit, if any, of oxidizing the arsenic prior to membrane filtration. A pilot membrane system was installed to treat a naturally contaminated groundwater in Virden, Manitoba, Canada. The groundwater in Virden contains between 38 and 44 µg/L of arsenic, primarily made up of As(III), with little particulate arsenic. In the first experiment three Filmtec® membranes were investigated: NF270, NF90 and XLE. Under all conditions tested the NF90 and NF270 membranes provided insufficient treatment of Virden's groundwater to meet Canada's recommended Interim Maximum Acceptable Concentration (IMAC) of 25 µg/L. The XLE membrane provided better arsenic removal and under the conditions of 25 Lmh flux and 70% recovery produced treated water with a total arsenic concentration of 21 µg/L. The XLE membrane is therefore able to sufficiently treat Virden's ground water. However treatment with the XLE membrane alone is insufficient to meet the USEPA's regulation of 10 µg/L or Canada's proposed Maximum Allowable Concentration (MAC) of 5 µg/L. The effects of recovery and flux on total arsenic passage are consistent with accepted membrane theory. Increasing the flux increases the flow of pure water through the membrane; decreasing the overall passage of arsenic. Increasing the recovery increases the bulk concentration of arsenic, which leads to higher arsenic passage. The second experiment investigated the arsenic oxidation capabilities of manganese dioxide (MnO2) and the rate at which the oxidation occurs. The feed water contained primarily As(III), however, when filtered by MnO2 at an Empty Bed Contact Time (EBCT) of only 1 minute, the dominant form of arsenic was the oxidized form [As(V)]. At an EBCT of 2 minutes the oxidation was nearly complete with the majority of the arsenic in the As(V) form. Little arsenic was removed by the MnO2 filter. The third and final experiment investigated the benefit, if any, to combining the membrane filtration and MnO2 treatment investigated in the first and second experiments. The effect of MnO2 pretreatment was dramatic. In Experiment I, the NF270 and NF90 membranes were unable to remove any arsenic while the XLE removed, at best, approximately 50% of the arsenic. Once pretreated with MnO2 the passage of arsenic through all of the membranes dropped to less than 4 µg/L, corresponding to approximately 91% to 98% removal. The dramatic improvement in arsenic removal can be attributed to charge. All three membranes are negatively charged. Through a charge exclusion effect the rejection of negatively charged ions is enhanced. During the first experiment, As(III) (which is neutrally charged) was the dominant form of arsenic, and was uninfluenced by the negative charge of the membrane. Once oxidized to As(V), the arsenic had a charge of -2, and was electrostatically repelled by the membrane. This greatly improved the arsenic rejection characteristics of the membrane. Nanofiltration alone is not a suitable technology to remove arsenic contaminated waters where As(III) is the dominant species. When combined with MnO2 pre-oxidation, the arsenic rejection performance of nanofiltration is dramatically improved.