A study of the effect of perturbations in spin ice systems: site dilution, weak exchange, quantum and finite-size effects 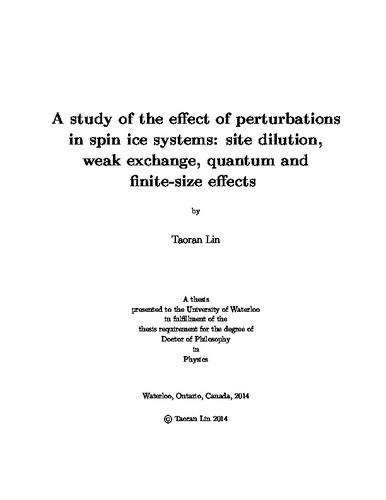 In this thesis we investigate a range of properties for spin ice under various perturbations theoretically. Diluted spin ices, Dy2−x Yx Ti2 O7 and Ho2−x Yx Ti2 O7 , where the magnetic rare-earth ions Dy3+ and Ho3+ are replaced by the non-magnetic Y3+ ions, are modeled by the random-site diluted dipolar spin ice Hamiltonians. It is found that the Monte Carlo simulation results for the specific heat of the model Hamiltonians describe the experimental measurements accurately up to x = 1.7 for a large temperature range. The experimentally observed, and simulation-confirmed, non-monotonicities in the specific heat broad peak and residual entropy are then rationalized theoretically by a numerical linked cluster expansion to the first order, i.e., a single-tetrahedron approximation. The broad peak of the specific heat of spin ice is shown to be related to the thermal defect monopole density. For a nearest- neighbour spin ice, the paramagnetic phase is shown to be stable for all dilution levels at finite temperatures through a random site-diluted Husimi tree Bethe-Peierls argument. The loss of the projective equivalence in the presence of dilution is commented for the problem. Thin film spin ices, are studied for a film surface normal to the [001] direction. Corrections to the Pauling’s residual entropy are derived for different surface states, and are confirmed by Monte Carlo study. An important geometrical object on the [001] surface, the orphan bond, is identified. By tuning the strength of the orphan bond, various surface states emerge in the simulations. Most notably, in the dipolar spin ice thin film with an antiferromagnetic orphan bond, a novel phenomenon of surface magnetic freezing is found in the simulations. The transition to long-range order for the surface freezing is found to be continuous. The mechanism for surface freezing is argued to be induced by a self-screening of the dipolar interactions due to the pyrochlore structure below the surface. The microscopic model of Dy2Ti2O7, is scrutinized for further neighbour exchange interactions. A dimensionality reduction [112] field experiment is considered, which allows for unambiguous determination for the constraints for the exchange interactions. With such constraints we attempt to fit the microscopic model of Dy2Ti2O7, to three sets of experiments. First is the specific heat measurement from the work of Pomaranski et al. [1], second is the specific heat measurement from the work of Ke et al. [2], and third is the neutron scattering measurement by Fennell et al. [3]. The second set of data is in quantitative agreement with the majority of specific heat measurements for Dy2Ti2O7, where a residual entropy plateau of Pauling’s value [4] is found. The first set of data, however, shows an absence of Pauling’s entropy, but it is believed to be better equilibrated [1]. In this work, we show by fitting our model to the three sets of data, that the second and third sets of data can be simultaneously fitted but not for the first and third sets of data. Therefore our analysis exposes further inconsistencies in the measurements for the compound Dy2Ti2O7, by relating specific heat and neutron scattering measurements through the microscopic model. We examine the pinch point singularity in the neutron scattering data of spin ice through Monte Carlo simulations. It is found in simulations that pinch points exist up to high temperatures in dipolar spin ice, where local ice-rule no longer applies. Such observation is crucial in understanding experimental observed pinch points in spin ice materials, such as in Ho2Ti2O7 [5], that the pinch point seen in neutron scattering may be a deceptive signal when the system possesses large dipolar interaction. The thermal broadening of the pinch points for a nearest-neighbour spin ice model is also considered. The correlation length from fitting the broadening of the pinch point is compared with the average thermal defect monopole distances. The quantum spin ice candidate material Yb2Ti2O7 is regarded as a rare candidate for spin liquid with a well parameterized Hamiltonian [6]. In the presence of a quantum microscopic model, numerical methods are needed in calculating its properties with controllable errors. For the Hamiltonian of the quantum spin ice Yb2Ti2O7, we demonstrate the capability of the numerical linked cluster method in calculating the neutron scattering intensity patterns. These results open avenues for future works on the study of the quantum spin ices.