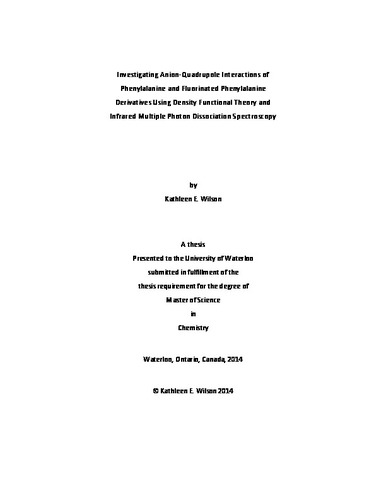 Electronic structure calculations have been used to provide a new model for the quadrupole moments of bare and fluorinated phenylalanine. Calculations of the quadrupole moments were performed at the B3LYP/6-311++G(d,p) level of theory with CHELPG partition scheme. Electrostatic mapping and graphical representations of the resulting quadrupole moments provides a new visual representation that accounts for the changing electrostatics of the phenyl ring. It is found that increasing fluorination increases the ability of the quadrupole moment to stabilize anions above the ring. It is also observed that position of the fluorination around the ring alters the direction of the quadrupole moment but does not affect the magnitude. Electronic structure calculations in combination with infrared multiple photon dissociation (IRMPD) spectroscopy have been used to determine the structural conformations of phenylalanine and fluorinated phenylalanine derivatives clustered with chloride, bromide, fluoride and trifluoromethanolate ions. Anions were clustered with phenylalanine (Phe), 3-fluorophenylalanine (3FPhe), 4-fluorophenylalanine (4FPhe) and 2,5-difluorophenylalanine (25FPhe). Anions clustered with phenylalanine derivatives had optimization and frequency calculations (B3LYP/6-311++G(d,p)), single point energy calculations (MP2/aug-cc-pVTZ), and anharmonic calculations (B3LYP/6-311++G(d,p)) completed. Harmonic frequency calculations were scaled by 0.968. Presently only clusters containing chloride and the phenylalanine derivatives have been acquired. For clusters where there are IRMPD spectra available, it is observed that higher energy isomers better match the lower wavenumber vibrational modes while the most stable conformations can accurately match the higher wavenumber vibrational modes. All calculated clusters are found to have energetically favoured structures where the anion is located in either the ring plane interacting with the ring edge and the amino carboxylic acid group or in a claw-like formation where the amino backbone hydrogens are all directing towards the anion perpendicular to the ring with CH directed towards the ring. Clusters involving chloride demonstrated that higher energy isomers better matched the IRMPD spectra suggesting carrier gas stabilization is occurring. Systematic computational investigations of the impact that fluorination degree and location permutations around the phenylalanine ring have on anion-quadrupole stabilizations were completed with chloride, fluoride and bromide clusters. Calculations were completed at the B3LPY/6-311++G(d,p) and MP2/aug-cc-pVTZ levels of theory for optimization and single point energy calculations, respectively. It is found that three distinct classes of fluorination permutation exist which can predict the lowest energy conformations of other fluorination degrees. Class 1 structures have fluorination occurring at positions 2 and 6 of the phenyl ring. Class 1 structures have increased anion-quadrupole binding as the quadrupole moment is more strongly felt when the charge density lies near the amino backbone. Class 2 structures are where neither position 2, nor position 6 are fluorinated. Localization of the charge density furthest from the amino backbone mimics conformations for unfluorinated phenylalanine-anion interactions. Class 2 structures tend to have interactions between the anion and ring plane as opposed to the ring face. Class 3 consists of either position 2 or position 6 being fluorinated and is split up into two subclasses that depend on secondary fluorination locations, positions 3 and 5 on the phenyl ring. Class 3 conformations consist of a mixture of class 1 and class 2 isomers. Class 3A has fluorination at a secondary location directly across from the primary fluorination location (for example positions 2 and 5 are fluorinated). Thus class 3A structures follow more closely to class 1 structures as the charge density is spread across the ring; hence the quadrupole moment has a greater influence on anion location. Class 3B lacks the secondary fluorination location and thus the charge density is localized on one side of the ring. This opens up ring edge interactions with the anion, mimicking the unfluorinated phenylalanine cases more closely. It is also observed that increasing ring fluorination increases the anion-quadrupole binding and softer anions are more likely to interact directly with the ring face.