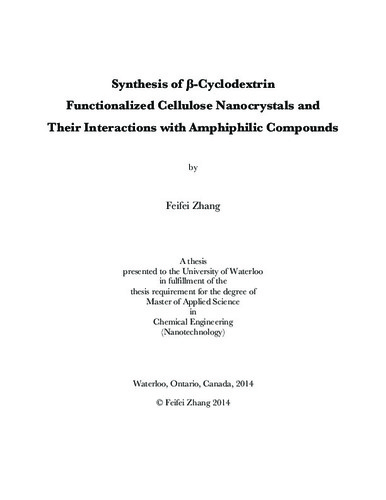 Cellulose nanocrystal (CNC) obtained from acid hydrolysis of cellulose fibres has attracted enormous interests due to its large surface area, high negative surface charge density, potential functionalities from modifications of surface hydroxyl groups and high aspect ratio. The special physical and chemical properties made CNC an excellent candidate for various applications, such as drug delivery, antimicrobials, water treatment, personal care products, etc. Upon grafting CNC with β-Cyclodextrin (β- CD), the hybrid system forms inclusion complex with water insoluble molecules or hydrophobic segments of amphiphilic polymers, hence novel functionalities can be introduced to CNC, such as the delivery of various active ingredients, constructing macromolecular structures with enhanced mechanical strength and modifying rheological property of solutions. In this thesis, the surface modification of CNC and CNC derivatives by β-CD and their characterization were reported and discussed. Due to the fact that β-CD forms inclusion complex with amphiphilic molecules, such as surfactants which are among the most important components in personal care formulations. Thus, the behaviors of CNC and CNC derivatives with grafted β-CD in the solution of amphiphilic molecules are of great importance for personal care applications and thus were investigated in detail. In order to have a better understanding on the surfactant behaviors in the presence of impurities, the influence of alcohol in surfactant solutions was also studied. β-CD functionalized CNC was prepared using cyanuric chloride as the cross-linking reagent. (MCT-β-CD) was synthesized by firstly hydrolyzing one chlorine atom in aqueous solution at 0°C then substituting the second chlorine atom by β-CD at room temperature in alkaline solutions. Then it was grafted by reacting the third chlorine atom with hydroxyl groups on the surface of CNC in aqueous solution. The grafting of β-CD was confirmed by UV-vis and FTIR spectroscopy. Grafting ratio was found to be 24.8 μmol/g for CNC-CD using phenolphthalein (PHTH) inclusion method. Briefly, the UV absorbance of PHTH solution decreases with increasing β-CD concentration upon the formation of inclusion complex. By measuring the absorbance of equilibrated CNC-CD and PHTH mixture, grafting ratio of β-CD can be determined from the calibration. The reaction conditions including water content, temperature and alkali concentration were investigated and the main limiting factor in using cyanuric chloride as the cross-linking reagent was found to be the hydrolysis of reactive chlorines. With the optimized reaction conditions, the grafting ratio was enhanced compared to previous reported studies using the same cross-linking reagent. The interaction between CNC-CD and various charged amphiphilic molecules were studied by isothermal titration calorimetry (ITC), tensiometry, zeta potential, turbidity and conductivity. The behavior of CNC was altered upon the grafting β-CD due to the host-guest interactions between β-CD and amphiphilic molecules. Shielded hydrophobicity of amphiphilic molecules, CNC-CD induced micellization, inclusion complex induced aggregation and transition of aggregation structures were observed and analyzed. Furthermore, preliminary research study to investigate the CNC-CD’s ability to modify the viscosity of amphiphilic polymer solutions was conducted. The results indicated the potential application of CNC-CD as viscosity modifier in personal care formulations. CNC was desulfated then cationized (dcCNC) by hydrolysis of sulfate groups and modification with glycidyl ammonium chloride (GTMAC). Then, β-CD was grafted using cyanuric chloride as the cross- linking reagent. Characterizations of dcCNC-CD were carried out using similar methods as described earlier. It was observed that due to the inverse of surface charge on CNC, the behaviors of dcCNC and dcCNC-CD in solutions of cationic and anionic surfactants were significantly different from those of pristine CNC. It was suggested that unlike CNC-CD, host-guest interactions between β-CD and amphiphilic molecules facilitated the re-dispersion of dcCNC-CD and enhanced the stability of the solutions by host-guest interaction and inclusion complex induced micellization. The influence of temperature and ionic strength on the interactions was studied using ITC. The dcCNC-CD has potential applications in conditioning formulations due to its affinity towards negatively charged hair/skin surfaces and the ability to deliver the benefits of nutrition, active or protective compounds. In order to gain a better insight on the surfactants’ interfacial and bulk behaviors for understanding polymer/surfactant interactions, the influence of impurities on the surface activity, pre-micellar aggregation and critical micelle concentration (cmc) were studied using mixtures of sodium dodecyl sulfate (SDS) and 1- dodecanol. Tensiometry indicated a significantly enhanced surface activity with increasing molar ratio of 1- dodecanol and decreasing temperature. The pre-micellar aggregation of dodecanol and SDS and solubilization of pre-micellar aggregates upon micellization were confirmed by light scattering and ITC. Increasing the 1-dodecanol fraction facilitated the aggregation and cmc of SDS and reduced the percentage of bound counter ion (f), and t influence of ionic strength on the cmc and f were discussed. As a result of above studies, knowledge on the surface modification of CNC, cyanuric chloride chemistry, interface and bulk solution behaviors of amphiphilic molecules were advanced. The studies of interactions between amphiphilic molecules and β-CD grafted CNC and CNC derivatives provided in- depth understanding on the system, which will be critical for applications in personal care products.