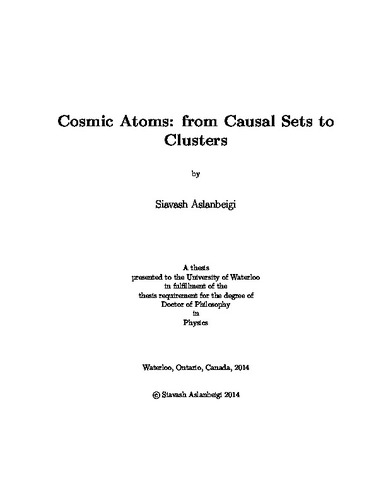 This thesis is a collection of works which seek to address certain aspects of the following puzzles: quantum gravity, initial conditions of the universe, the cosmological constant problem, and baryonic processes in clusters of galaxies. The causal set theory approach to quantum gravity postulates that the fundamental structure of spacetime is a partially ordered and locally finite set. Within this framework, we formulate a statistical correspondence for judging when a causal set is well approximated by a Lorentzian manifold. To that end, we prove a theorem which shows that the number-volume correspondence, if required to hold even for arbitrarily small regions, is best realized via Poisson sprinkling. Surprisingly, we also show that 1+1 dimensional Lorentzian lattices provide a much better N-V correspondence than Poisson sprinkling for macroscopically large volumes. We then study phenomenological implications of wave propagation on causal sets. We introduce a family of generalized d'Alembertian operators in D-dimensional Minkowski spacetime which are manifestly Lorentz-invariant, retarded, and non-local, the extent of the nonlocality being governed by a single parameter. These operators arise as averages of matrix operators meant to describe the propagation of a scalar field in a causal set. We compute their action on plane waves and show that their spectrum g(p) (p being the momentum-vector) contains also an imaginary part for timelike p, whose sign depends on whether p is past or future-directed. For small p, g(p) is necessarily proportional to the Lorentzian norm of p, but for large p it becomes constant, raising the possibility of a genuinely Lorentzian perturbative regulator for quantum field theory. We also address the question of whether or not the evolution defined by generalized d'Alembertian operators is stable, finding evidence that the original 4D causal set d'Alembertian is unstable, while its 2D counterpart is stable. Motivated by the construction of a quantum field theory on a background causal set, we proceed to define a distinguished ``ground state'' or ``vacuum'' for a free scalar quantum field in a globally hyperbolic region of an arbitrarily curved spacetime. This state, which we call the Sorkin-Johnston (SJ) state, is defined for all compact regions and for many noncompact ones. In a static spacetime we find that the SJ vacuum coincides with the usual ground state. We then determine it for a massive free scalar field in D=d+1 dimensional de Sitter space. In cases where it is well-defined, the SJ vacuum always corresponds to one of the de Sitter-invariant alpha-vacua, with the value of alpha depending on (i) whether the mass of the field is in the complementary or principal series, (ii) whether it is evaluated on the complete de Sitter manifold or its Poincare half-space, and (iii) whether the spacetime dimension is even or odd. We determine the SJ state also for a radiation-filled, spatially homogeneous and isotropic cosmos, and show that the super-horizon correlations are approximately the same as those of a thermal state. Finally, we illustrate the inherent non-locality of our prescription with the example of a spacetime which sandwiches a region with curvature in-between flat initial and final regions. The cosmological constant ``problem" refers to the huge discrepancy between the observed value of the cosmological constant and our expectations from the vacuum energy of quantum fields. We explore a modified-gravity proposal which addresses this puzzle by decoupling the quantum vacuum from space-time geometry via an incompressible fluid, known as Gravitational Aether. We discuss classical predictions of this theory along with its compatibility with cosmological and experimental tests of gravity. We argue that deviations from General Relativity (GR) in this theory are sourced by pressure or vorticity. In particular, the theory predicts that the gravitational constant for radiation is 33% larger than that of non-relativistic matter, which we show is consistent at the 2-sigma level with (most pre-Planck) cosmic microwave background (CMB), Ly-alpha forest, and light element abundance observations.It is further shown that all Parametrized Post-Newtonian (PPN) parameters have the standard GR values aside from the anomalous coupling to pressure. A more subtle prediction of this model (assuming irrotational aether) is that the so-called gravitomagnetic effect is 33% larger than the GR prediction. This is consistent with current limits from LAGEOS and Gravity Probe B at the 2-sigma level. Finally, we present a statistically-optimal and model-independent method to extract the pressure profile of hot gas in the intracluster medium (ICM). Using the thermal Sunyaev-Zeldovich effect, we constrain the mean pressure profile of the ICM by appropriately considering all primary CMB and instrumental noise correlations, while using the maximum resolution and sensitivity of all frequency channels. As a first application, we analyze CMB maps of WMAP 9-year data through a study of the Meta-Catalogue of X-ray detected Clusters of galaxies (MCXC). We constrain the universal pressure profile out to 4R500 with 15-sigma confidence, though our measurements are only significant out to R200. Using a temperature profile constrained from X-ray observations, we measure the mean gas mass fraction out to R200. Within statistical and systematic uncertainties, our constraints are compatible with the cosmic baryon fraction and the expected gas fraction in halos. While Planck multi-frequency CMB data are expected to reduce statistical uncertainties by a factor of 20, we argue that systematic errors in determining mass of clusters dominate the uncertainty in gas mass fraction measurements at the level of 20 percent.