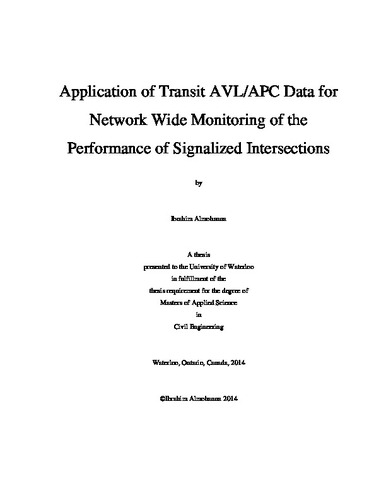 The quality of service in urban transportation networks is determined mainly by the performance of the intersections. In particular, signalized intersections play a significant role in regulating the traffic in urban transportation networks. As a result, it is essential for transportation authorities to have a system, which can locate poorly operating intersections in the network and rank them for potential improvements. In practice, intersection performance is typically evaluated through the use of models such as HCS (Highway Capacity Software) or Synchro. These models estimate measures of performance (e.g. average vehicle delay, queue length, or level of service) on the basis of determinist and/or stochastic queueing theory. Another approach is to directly estimate intersection performance on the basis of delays experienced by vehicles. One source for such data is public transit bus fleets which are equipped with automatic vehicle location (AVL) systems and automatic passenger counting (APC) systems. These systems use GPS to record where and when a bus stops and the duration of the stop. The purpose of this research was to compare the intersection performance measures produced by Synchro and those estimated from archived AVL and APC data. An empirical evaluation was conducted using 28 intersections in the Region of Waterloo. Average delay and queue length were estimated using Synchro and estimated from archived AVL/APC data. The results show that the estimation of mean delay from the two methods are highly correlated. The estimation of queue length show larger differences, and in general, Synchro underestimated the queue length when compared to the AVL/APC data.