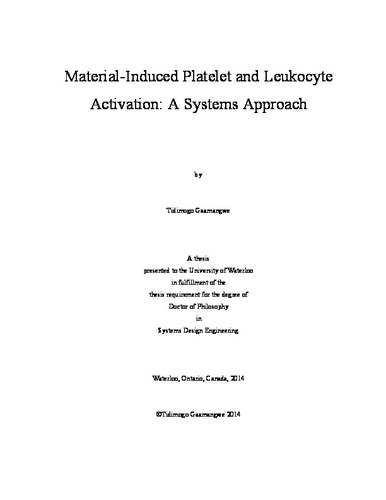 A systems approach in the study of blood-biomaterial interactions (BBI) is likely to provide better insight into the transient behaviors of complex biological systems. Although some attempts have been made to apply a systems approach in blood-biomaterial studies, a good framework for applying a systems approach has not yet been achieved. In this thesis, the case for a systems approach is presented and a framework is proposed. As a demonstration, the systems approach is applied to the development of an in vitro model for BBI. In vitro models play an important role in the initial investigation of BBI. Therefore, careful consideration of their parameters to mimic physiological parameters is crucial for results that can be translated to physiological conditions. The parameters of the in vitro model used in this thesis were determined using a systems approach method. The fluid dynamics of the model were characterized, to account for the model blood sample always including air, and an improved time-averaged wall shear stress was proposed. Since wall shear stress is an important parameter that determines cell activation and adhesion, in vitro studies were performed to investigate and validate the model with experiments. In line with a systems approach and clinical relevance, whole blood samples were used in the in vitro experiments. Platelet activation was investigated, as characterized by platelet microparticle (PMP) formation and expression of both P-selectin and the integrin glycoprotein receptor GPIIb/IIIa. For whole blood, in the absence of model stents, there was no significant sample volume or shear effect on PMP formation for wall shear stress up to 56 dyn/cm2. However, in the presence of model stents, combined volume and shear-dependent PMP formation was observed. While GPIIb/IIIa expression was reduced, P-selectin, on the other hand, did not generally show significant change after 2 hours of incubation. Leukocyte activation was also investigated, as characterized by the expression of tissue factor (TF), Mac-1, C3aR and toll-like receptor 4 (TLR-4). In the absence of model stents, sample volume had minimal effect on leukocyte activation but in the presence of model stents, a sample volume effect was observed at high shear rates, especially on Mac-1 expression. The other markers, TF, C3aR and TLR-4 did not show sensitivity to the volume effect. However, under combined volume-stent-shear, all markers were down-regulated at high shear. Correspondingly, platelet-leukocyte aggregation was also generally reduced. Leukocytes, as well as platelets, were sensitive to surface-area-to-volume ratio. The use of low surface area-to-volume ratio, below the ISO Standard recommended limit, resulted in reduced platelet and leukocyte sensitivity to shear and/or material. However, sensitivity to shear was still high on platelet-leukocyte aggregation. Also cell surface adhesion was shear-dependent but could not be linked to a sample volume effect. Complement inhibitor FUT-175 reduced PMP formation but had less effect on GPIIb/IIIa expression. Complement inhibition also reduced leukocyte activation, especially under shear conditions. Considerable reduction in leukocyte activation was observed under shear in the presence of model stents. These conditions would normally be expected to produce high complement activation. Furthermore, the conditions with the most reduction in platelet and leukocyte activation corresponded with the most reduction in platelet-leukocyte aggregation in the fluid phase. On the stent surface, FUT-175 inhibited leukocyte adhesion but allowed some platelet adhesion. Thus, complement inhibition with FUT-175 has the potential to reduce thrombosis while possibly retaining platelet function in hemostasis. The effect of surface roughness was investigated with inhomogeneous multiscale roughness surfaces. Although the unetched and acid-etched stent surfaces had similar average surface roughness values, the acid-etched surface resulted in increased platelet activation and platelet-leukocyte aggregation. In addition, platelet-leukocyte aggregates seemed to be more resistant to shear-induced disaggregation. However, when complement inhibitor FUT-175 was introduced, platelet and leukocyte activation and aggregation were reduced to similar levels as for unetched stents. This suggests that complement inhibition with FUT-175 has the potential to reduce material-induced thrombosis in the presence of nano/micro-structured stent surfaces such as those used for drug-eluting stents.