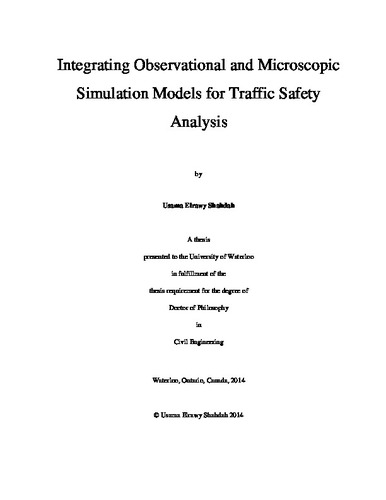 In safety analysis, two questions typically need to be addressed: 1) how to identify unsafe sites for priority intervention? and 2) how to determine the effectiveness of treatments introduced at these and other sites? Two types of approaches have been considered in the literature to provide answers for these questions: (1) observational models based on historical crash data and (2) observed or simulated higher risk vehicle interactions or traffic conflicts. Observational crash-based models are good at predicting higher severity crashes, but they tend to ignore higher risk vehicle interactions that compromise safety, that have not resulted in crashes (e.g. near misses). Proponents of microscopic simulation argue that ignoring these higher risk interactions can severely understate the safety problem at a given site and lead to a misallocation of scarce treatment funds. Another problem with observational crash prediction models is the need for sufficient crash data reported over an extended period of time to provide reliable estimates of “potential” lack of safety. This requirement can be a challenge for certain types of treatment and different sites or locations. Furthermore, observational approaches are not causal in nature, and as such, they fail to provide a sound “behavioural” rationale for “why” certain treatments affect safety. On the other hand, traffic conflicts occur more frequently than crashes and can provide a stronger experimental basis for estimating safety effects on a short-term basis. This is especially important given the rare random nature of crashes for certain traffic conditions. Additionally, they provide a more rational basis for lack of safety than is normally available from crash occurrence data. Basically, through the application of calibrated behavioural simulation, traffic conflicts can be linked to specific driver actions and responses at a given site, more so than conventional reported crashes. As such, they permit a causal underpinning for possible treatment effects and this is important to decision-makers because it underscores why certain treatments act to enhance safety, rather than simply providing an estimate of the treatment effect itself. Notwithstanding the usefulness of conflict-based measures, observed crashes remain the primary verifiable measure for representing failures in the transportation systems. Unfortunately traffic conflicts have not been formally linked to observed crashes, and hence their values as indicators for treatment effect have not been fully explored. This presents a challenge on how best to use both conflicts and observed crashes to better understand where safety is most problematic, where intervention is needed, and how best to resolve specific safety problems? In this thesis, the position is taken that a complete understanding of safety problems at a given site can only emerge from a more inclusive analysis of both observed crashes and traffic conflicts. This is explored by developing two integrated models: (1) An integrated priority ranking model is presented that combines estimates from observational crash prediction with an analysis of simulated traffic conflicts; (2) An integrated treatment model is presented that uses simulated traffic conflicts that are linked statistically to observed crashes to provide estimates of crash modification factor (CMF). The suitability of these integrated models has been evaluated using data for a sample of signalized intersections from Toronto for the period 1999-2006. In the absence of a benchmark (or true) priority ranking outcome, a number of evaluation criteria were considered, and the integrated ranking model was found to yield better results than both conventional observational crash-based models (including empirical Bayesian, potential for safety improvement methods) and conflict-based models (including conflict frequency and rate for different risk thresholds). For treatment effects, the results suggest that CMFs can be estimated reliably from conflicts derived from microsimulation, where the simulation platform has been sufficiently calibrated. The link between crashes and conflicts provides additional inferences concerning treatment effects, in those cases where treatments were not previously implemented (i.e., no after history). Since there is an absence of crash history, the treatment effect is based exclusively on simulated conflicts. Moreover, the integrated model has the added advantage of providing site-specific CMFs instead of applying a constant CMF across all sites considered for a potential treatment.