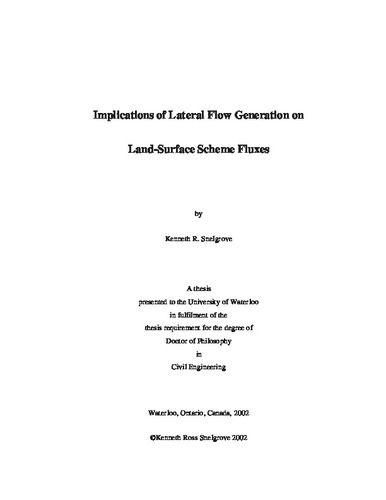 This thesis details the development and calibration of a model created by coupling a land surface simulation model named CLASS with a hydrologic model named WATFLOOD. The resulting model, known as WatCLASS, is able to serve as a lower boundary for an atmospheric model. In addition, WatCLASS can act independently of an atmospheric model to simulate fluxes of energy and moisture from the land surface including streamflow. These flux outputs are generated based on conservation equations for both heat and moisture ensuring result continuity. WatCLASS has been tested over both the data rich BOREAS domains at fine scales and the large but data poor domain of the Mackenzie River at coarse scale. The results, while encouraging, point to errors in the model physics related primarily to soil moisture transport in partially frozen soils and permafrost. Now that a fully coupled model has been developed, there is a need for continued research by refining model processes and test WatCLASS's robustness using new datasets that are beginning to emerge. Hydrologic models provide a mechanism for the improvement of atmospheric simulation though two important mechanisms. First, atmospheric inputs to the land surface, such as rainfall and temperature, are transformed by vegetation and soil systems into outputs of energy and mass. One of these mass outputs, which have been routinely measured with a high degree of accuracy, is streamflow. Through the use of hydrologic simulations, inputs from atmospheric models may be transformed to streamflow to assess reliability of precipitation and temperature. In this situation, hydrologic models act in an analogous way to a large rain gauge whose surface area is that of a watershed. WatCLASS has been shown to be able to fulfill this task by simulating streamflow from atmospheric forcing data over multi-year simulation periods and the large domains necessary to allow integration with limited area atmospheric models. A second, more important, role exists for hydrologic models within atmospheric simulations. The earth's surface acts as a boundary condition for the atmosphere. Besides the output of streamflow, which is not often considered in atmospheric modeling, the earth's surface also outputs fluxes of energy in the form of evaporation, known as latent heat and near surface heating, known as sensible heat. By simulating streamflow and hence soil moisture over the land surface, hydrologic models, when properly enabled with both energy and water balance capabilities, can influence the apportioning of the relative quantities of latent and sensible heat flux that are required by atmospheric models. WatCLASS has shown that by improving streamflow simulations, evaporation amounts are reduced by approximately 70% (1271mm to 740mm) during a three year simulation period in the BOREAS northern old black spruce site (NSA-OBS) as compared to the use of CLASS alone. To create a model that can act both as a lower boundary for the atmosphere and a hydrologic model, two choices are available. This model can be constructed from scratch with all the caveats and problems associated with proving a new model and having it accepted by the atmospheric community. An alternate mechanism, more likely to be successfully implemented, was chosen for the development of WatCLASS. Here, two proven and well tested models, WATFLOOD and CLASS, were coupled in a phased integration strategy that allowed development to proceed on model components independently. The ultimate goal of this implementation strategy, a fully coupled atmospheric - land surface - hydrologic model, was developed for MC2-CLASS-WATFLOOD. Initial testing of this model, over the Saguenay region of Quebec, has yet to show that adding WATFLOOD to CLASS produces significant impacts on atmospheric simulation. It is suspected, that this is due to the short term nature of the weather simulation that is dominated by initial conditions imposed on the atmospheric model during the data assimilation cycle. To model the hydrologic system, using the domain of an atmospheric model, requires that methods be developed to characterize land surface forms that influence hydrologic response. Methods, such as GRU (Grouped Response Unit) developed for WATFLOOD, need to be extended to taken advantage of alternate data forms, such as soil and topography, in a way that allows parameters to be selected <I>a priori</I>. Use of GIS (Geographical Information System) and large data bases to assist in development of these relationships has been started here. Some success in creating DEMs, (Digital Elevation Model) which are able to reproduce watershed areas, was achieved. These methods build on existing software implementations to include lake boundaries information as a topographic data source. Other data needs of hydrologic models will build on relationships between land cover, soil, and topography to assist in establishing grouping of these variables required to determine hydrologic similarity. This final aspect of the research is currently in its infancy but provides a platform from which to explore for future initiatives. Original contributions of this thesis are centered on the addition of a lateral flow generation mechanism within a land surface scheme. This addition has shown a positive impact on flux returns to the atmosphere when compared to measured values and also provide increased realism to the model since measured streamflow is reproduced. These contributions have been encapsulated into a computer model known as WatCLASS, which together with the implementation plan, as presented, should lead to future atmospheric simulation improvements.