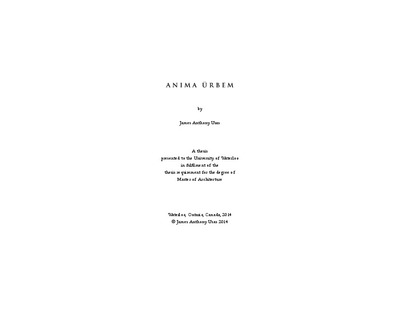 In 1916 the macrocosmic tensions of global conflict became focused on the microcosm of Berlin, Ontario. The nationalistic turmoil of the First World War incited a series of destructive events resulting in a schism within the flourishing industrial community and pitting ethnic Germans against the loyalist British. The outcome of this internal conflict would see one identity forfeited for another, the name Berlin for that of Kitchener. Over the next century, Kitchener’s downtown succumbed to a series of massive urban fires perforating the dense fabric of the city with echoing voids of collective amnesia. The historic fires of Berlin/Kitchener are the backdrop of the thesis, with two sites (the Foundation & Schneider’s Creek) forming the stage upon which a shamanic transformation is enacted through an intuitive assembly of historical narrative, photography, archival film, newspaper articles and psychogeographical research, illuminating the liminal space between personal and collective memories. Poetically inspired by the late Andrei Tarkovsky’s cinematic masterpiece, STALKER, the likenesses of the film’s primary characters have been composited into a series of montage images, standing in for the authors perspective and describing a mythic journey through the investigated sites, further blurring the boundary between history and memory, fact and fiction. Summoned by The Call, the Wanderer leaves the common world and travels into the bowels of the city, a fantastic subterranean underworld of shape-shifting humans, shadow figures and mythical beings. Like the stalker of Tarkovsky’s film, the Wanderer must navigate a shifting labyrinth of matter and memory to reach his final destination and reconcile with the fires of history. Only by answering The Call of memories forgotten can the Wanderer be reborn from the canal of the World Womb. Part visual essay and part film treatment, ANIMA URBEM is an imagistic/textual document narrating a hallucinogenic unfolding of occurrences throughout the history of Berlin/Kitchener and accompanied by the original film House of the Gathering, a poetic refrain within the memory weave.