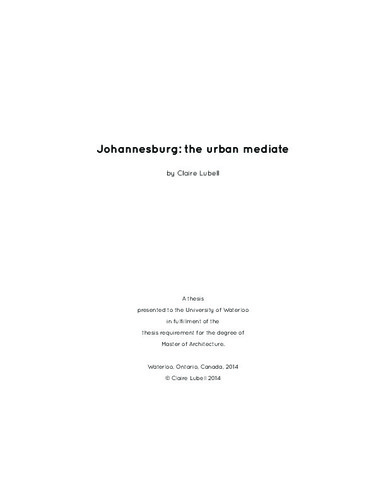 Object _ This thesis draws from the specific universality of Johannesburg to develop a theoretical framework that critically examines the opposing forces of its urbanization. In just 130 years the city of Johannesburg has in fact been many different cities. As the embodiment of rapidly shifting economic and cultural ideologies, each identity was expediently manifested, leaving little time for sedimentation. Built through accumulated juxtapositions, Johannesburg has continuously evaded categorization despite popular perception as a divided city. Throughout its history it has simultaneously embodied both apparently normative and exceptional trends of urban development that relate it to both emerging cities of the global south and competitive cities of the global north. And today, its unique cosmopolitanism reveals the need for theoretical frameworks which focus less on categorization and more on complexity. Theory _ Like Johannesburg this thesis straddles popular approaches of urban study and uses a theoretical lens of mediation to position itself between aesthetic architectural research and territorial geographic research and frame urban forms as mediate spaces. Mediate spaces are the product of opposing forces of city building and subsequently become the site of contestation over those forces as well as the agent by which those forces evolve. The urban mediate, or device, is therefore the product, site, and agent of a perpetual feedback between process and future state. This product is always unique for, though the opposition may be similar in diverse contexts, its mediation will be calibrated by the specificity of territory, economy and society. This research draws from Henri Lefebvre to frame the urban as a space of struggle between homogenizing global forces of ideology and individualizing local forces of everyday life and Frederic Jameson to understand mediation not as a midpoint but rather that which is produced through the unity of an oppositional relationship, or juxtaposition. By mobilizing a theory of mediation to inform a research methodology, this thesis frames Johannesburg as a differential totality rather than a neutral field of juxtaposed fragments, thereby exploring the convergence between these fragments rather than their divergence. This is a critical agenda for polarized cities. Method _ This thesis examines primary oppositions of Johannesburg’s urbanization and the critical urban devices that have produced the city over time. These oppositions emerge from economic transitions on one hand, typical of cities of the global north, and cultural or demographic transitions on the other, typical of cities of the global south. The evolution of these transitions is illustrated through a periodization of the city’s development; from the discovery of gold to the colonial town, from the industrial city to the divided city, from the African metropolis to the world class region. Within each period a pair of urban devices are framed which both exemplify and subvert perceptions of Johannesburg’s apparently normative or exceptional development; the compound and grid, the township and tower, and the taxi rank and suburban complex. While acknowledging apartheid’s powerful urban influence, the re-calibrated periodization decentres it as the primary analytical lens because it has generally led to research which isolates Johannesburg as extreme and absurd. This method seeks to integrate the city into broader urban discourse in order to challenge existing approaches to urban research and theory.