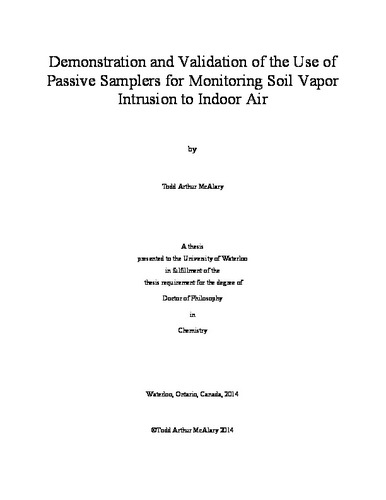 This thesis documents a demonstration/validation of passive diffusive samplers for assessing soil vapor, indoor air and outdoor air concentrations of volatile organic compounds (VOCs) at sites with potential human health risks attributable to subsurface vapor intrusion to indoor air. The study was funded by the United States (U.S.) Department of Defense (DoD) and the U.S. Department of the Navy (DoN). The passive samplers tested included: SKC Ultra and Ultra II, Radiello®, Waterloo Membrane Sampler (WMS), Automated Thermal Desorption (ATD) tubes, and 3M OVM 3500. The program included laboratory testing under controlled conditions for 10 VOCs (including chlorinated ethenes, ethanes, and methanes, as well as aromatic and aliphatic hydrocarbons), spanning a range of properties and including some compounds expected to pose challenges (naphthalene, methyl ethyl ketone). Laboratory tests were performed under conditions of different temperature (17 to 30 oC), relative humidity (30 to 90 % RH), face velocity (0.014 to 0.41 m/s), concentration (1 to 100 parts per billion by volume [ppbv]) and sample duration (1 to 7 days). These conditions were selected to challenge the samplers across a range of conditions likely to be encountered in indoor and outdoor air field sampling programs. A second set of laboratory tests were also conducted at 1, 10 and 100 parts per million by volume (ppmv) to evaluate concentrations of interest for soil vapor monitoring using the same 10 VOCs and constant conditions (80% RH, 30 min exposure, 22 oC). Inter-laboratory testing was performed to assess the variability attributable to the differences between several laboratories used in this study. The program also included field testing of indoor air, outdoor air, sub-slab vapor and deeper soil vapor at several DoD facilities. Indoor and outdoor air samples were collected over durations of 3 to 7 days, and Summa canister samples were collected over the same durations as the passive samples for comparison. Subslab and soil vapor samples were collected with durations ranging from 10 min to 12 days, at depths of about 15 cm (immediately below floor slabs), 1.2 m and 3.7 m. Passive samplers were employed with uptake rates ranging from about 0.05 to almost 100 mL/min and analysis by both thermal desorption and solvent extraction. Mathematical modeling was performed to provide theoretical insight into the potential behavior of passive samplers in the subsurface, and to help select those with uptake rates that would minimize the risk of a negative bias from the starvation effect (which occurs when a passive sampler with a high uptake rate removes VOC vapors from the surroundings faster than they are replenished, resulting in biased concentrations). A flow-through cell apparatus was tested as an option for sampling existing sub-surface probes that are too small to accommodate a passive sampler or sampling a slip-stream of a high-velocity gas (e.g., vent-pipes of mitigation systems). The results of this demonstration show that all of the passive samplers provided data that met the performance criteria for accuracy and precision (relative percent difference less than 45 % for indoor air or 50% for soil vapor compared to conventional active samples and a coefficient of variation less than 30%) under some or most conditions. Exceptions were generally attributable to one or more of five possible causes: poor retention of analytes by the sorbent in the sampler; poor recovery of the analytes from the sorbent; starvation effects, uncertainty in the uptake rate for the specific combination of sampler/compound/conditions, or blank contamination. High (or positive) biases were less common than low biases, and attributed either to blank contamination, or to uncertainty in the uptake rates. Most of the passive samplers provided highly reproducible results throughout the demonstrations. This is encouraging because the accuracy can be established using occasional inter-method verification samples (e.g., conventional samples collected beside the passive samples for the same duration), and the field-calibrated uptake rates will be appropriate for other passive samples collected under similar conditions. Furthermore, this research demonstrated for the first time that passive samplers can be used to quantify soil vapor concentrations with accuracy and precision comparable to conventional methods. Passive samplers are generally easier to use than conventional methods (Summa canisters and active ATD tubes) and minimal training is required for most applications. A modest increase in effort is needed to select the appropriate sampler, sorbent and sample duration for the site-specific chemicals of concern and desired reporting limits compared to Summa canisters and EPA Method TO-15. As the number of samples in a given program increases, the initial cost of sampling design becomes a smaller fraction of the overall total cost, and the passive samplers gain a significant cost advantage because of the simplicity of the sampling protocols and reduced shipping charges.

Todd Arthur McAlary (2014). Demonstration and Validation of the Use of Passive Samplers for Monitoring Soil Vapor Intrusion to Indoor Air. UWSpace. http://hdl.handle.net/10012/8643