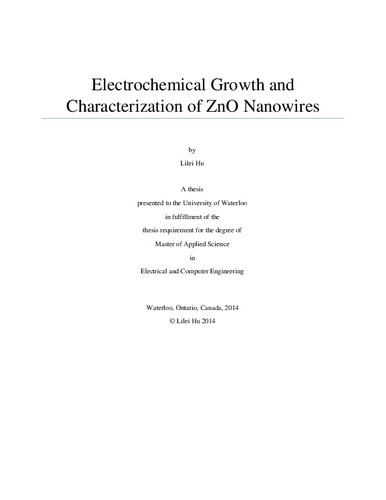 ZnO semiconductor materials, especially nanostructured materials, have potential applications in large-area electronics, photonics and optoelectronics due to their unique electrical and optical properties. ZnO nanowires have advantages of high surface area to volume ratio, with the prospective for nanoscale control of doping the electrical properties for 1-D nanoelectronic devices. Many techniques have been tried to achieve high quality ZnO nanowires in large scale with low cost and simple fabrication. However, most of these techniques require high temperatures that exclude applications in flexible electronics. P-type conductivity is another impediment for fully realizing ZnO materials for electronic device application; and this limitation has prevented advances in optoelectronic and integrated circuit applications for ZnO. To overcome the problems, this study investigated the synthesis and doping of ZnO nanowires at low temperature through a rapid electrochemical deposition growth technique. Material properties were studied using scanning electron microscopy (SEM), photoluminescence spectroscopy (PL), Raman spectroscopy, X-ray diffraction (XRD), ultraviolet to visible (UV-Vis) transmission spectroscopy, and electrical current-voltage measurements. ZnO nanowire doping was investigated using Al for n-type doping and for p-type doping, Ag/Al (co-doping) and Li. Al and Ag have significant influences on ZnO nanowire structures, while Li was found to improve the nanowire structure quality. The mechanisms for electrochemical deposition were studied through characterization of the chemical reactions, interface science and semiconductor/solution interface. It was found that the low temperature grown nanowires had high oxygen vacancy condition induced donor defect states, while, incorporation of Li dopants contributed to trap states (deep acceptor states), rather than shallow acceptor states in the band gap. Shown by XRD and PL, oxygen assisted post-growth annealing was found to promote recrystallization of ZnO and elimination of oxygen vacancies for better crystal quality and photoluminescence emission. Cr, Al or Au metals were used as contacts to Li-doped ZnO nanowires to examine electrical properties of the doped nanowires, turning out high ideal factor were obtained because of the poor contact quality due to significant surface and interface states in ZnO nanowires. At last, mechanisms of surface states related tunneling current at the metal-semiconductor interface were discussed.