Construction and Characterization of a Fine-Tuned Lytic Phage Display System 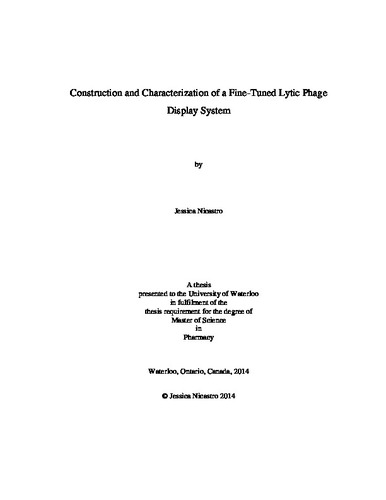 Bacteriophage (phage) Lambda (λ) has played a key historic role in driving our current understanding of molecular genetics. The lytic nature of this bacterial virus along with the conformation of its wild-type capsid protein (gpD) assembly offer many advantages for the virus for a phage display platform. Protein gpD has been used extensively for fusion polypeptides that can be expressed from plasmids in Escherichia coli and persevere, or even increase, solubility. In this study, the exploitation of gpD for the design of a dual expression system for the display of enhanced green fluorescent protein (eGFP) was developed and characterized. In this system, gpD expression is encoded by mutant  infecting phage particles, λDam, that can only produce a wild type length gpD allele within specialized strains of E. coli that can suppress the mutation. However, the functionality of gpD alleles, produced by passage of λDam through various suppressor strains, varies dramatically in their ability to restore functional packaging to the λDam phage, imparting a first dimension of decorative control. As a second dimension of decorative control, a D::eGFP translational fusion on a multicopy plasmid, encoding gpD::eGFP, complements the Dam mutation in trans and is regulated by the temperature-labile  CI[Ts]857 repressor, allowing for the conditional expression of D::eGFP by thermoregulation. In combination, the effective exploitation of these two variables has permitted the effective development of a fine-tuned λ lytic phage display system. Of the suppressor-imparted alleles, gpDQ68S, gpDQ68Y, and gpDwt: the allele with the poorest functionality, gpDQ68S (SupD), in combination with submaximal expression of gpD::eGFP conferred the highest incorporation of the fusion into the λDam phage capsid in all combinations. Differences in size, fluorescence, and absolute protein decoration between phage preparations was achieved by varying the temperature of the suppressor host carrying the D::eGFP fusion plasmid. The effective preparation with these two variables provides a simple means to manage fusion decoration on the surface of phage λ for a variety of fusion partners and applications.