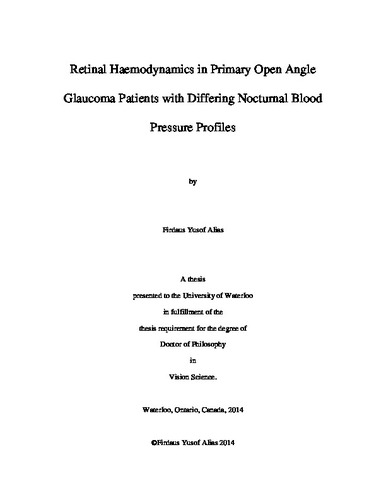 The impairment of ocular haemodynamics has been reported in primary open angle glaucoma (POAG) patients using various blood flow measurement techniques. Studies have shown hypotension may accelerate progression in POAG and a marked nocturnal blood pressure reduction (NBPR) was reported to further expedite the neuro-degenerative disease. It has been suggested that extreme NBPR may be a form of systemic vascular dysregulation that is manifested as an ocular dysregulation, but this hypothesis has never been tested. In addition, the relationship, if any, of retinal haemodyanamics to magnitude of the NBPR is also unknown. A prototype Doppler spectral domain optical coherence tomographer (SD-OCT) together with the more established bi-directional Laser Doppler velocimetry with simultaneous vessel densitometry (BLDV-SVD) methodology (Canon Laser Blood Flowmeter, CLBF) were utilized to see if the NBPR is associated to impaired retinal haemodynamics in glaucoma patients. The specific aims of this thesis were: (1) To evaluate the association between retinal hemodynamics of healthy eyes with age, as derived by Doppler SD-OCT, (2) To evaluate retinal blood flow (RBF) in patients with early POAG and differing NBPR profiles, (3) To investigate the relationship between Doppler SD-OCT derived retinal haemodynamics and the retinal nerve fiber layer (RNFL) thickness in patients with early POAG and healthy age-matched controls, (4) To evaluate the vascular reactivity in patients with early POAG with different NBPR profiles using a normoxic hypercapnia provocation stimulus. Perfusion to the retina was not altered with increasing age among healthy people in the range of 20 to 70 years. Patients with early POAG who exhibited an exaggerated nocturnal reduction in mean arterial pressure also demonstrated lower RBF values as shown by the measurement of Doppler SD-OCT. The change in retinal circulation in early POAG was related to reduced RNFL thickness and a larger venous area may be associated with thicker RNFL among controls. Patients with early POAG who exhibited an exaggerated NBPR also demonstrated disturbance of retinal vascular reactivity.