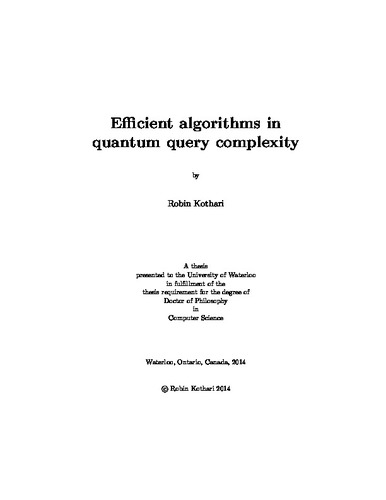 In this thesis we provide new upper and lower bounds on the quantum query complexity of a diverse set of problems. Specifically, we study quantum algorithms for Hamiltonian simulation, matrix multiplication, oracle identification, and graph-property recognition. For the Hamiltonian simulation problem, we provide a quantum algorithm with query complexity sublogarithmic in the inverse error, an exponential improvement over previous methods. Our algorithm is based on a new quantum algorithm for implementing unitary matrices that can be written as linear combinations of efficiently implementable unitary gates. This algorithm uses a new form of ``oblivious amplitude amplification'' that can be applied even though the reflection about the input state is unavailable. In the oracle identification problem, we are given oracle access to an unknown N-bit string x promised to belong to a known set of size M, and our task is to identify x. We present the first quantum algorithm for the problem that is optimal in its dependence on N and M. Our algorithm is based on ideas from classical learning theory and a new composition theorem for solutions of the filtered gamma_2-norm semidefinite program. We then study the quantum query complexity of matrix multiplication and related problems over rings, semirings, and the Boolean semiring in particular. Our main result is an output-sensitive algorithm for Boolean matrix multiplication that multiplies two n x n Boolean matrices with query complexity O(n sqrt{l}), where l is the sparsity of the output matrix. The algorithm is based on a reduction to the graph collision problem and a new algorithm for graph collision. Finally, we study the quantum query complexity of minor-closed graph properties and show that most minor-closed properties---those that cannot be characterized by a finite set of forbidden subgraphs---have quantum query complexity Theta(n^{3/2}) and those that do have such a characterization can be solved strictly faster, with o(n^{3/2}) queries. Our lower bound is based on a detailed analysis of the structure of minor-closed properties with respect to forbidden topological minors and forbidden subgraphs. Our algorithms are a novel application of the quantum walk search framework and give improved upper bounds for several subgraph-finding problems.