Operation of Distribution Systems with PEVs and Smart Loads 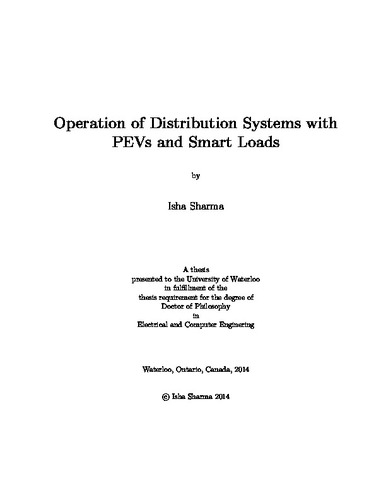 With the evolving concept of smart grids, Local Distribution Companies (LDCs) are gradually integrating advanced technologies and intelligent infrastructures to maximize distribution system capability, modernize the grid, and lay the foundation for smart loads. With the development of smart grids, utilities and customers will be able to coordinately send, retrieve, visualize, process and/or control their energy needs for the benefit of both. This thesis first presents a novel smart distribution system operation framework for smart charging of plug-in electric vehicles (PEVs). Thus, a three-phase Distribution Optimal Power Flow (DOPF) model is proposed, which incorporates comprehensive models of underground cables, transformers, voltage dependent loads, taps and switch capacitors, and their respective limits, to determine optimal feeder voltage-control settings and PEV smart-charging schedules. Various objective functions from the perspective of the LDC and customers are considered, and controlled tap, switch capacitors, and charging schemes are determined for various scenarios to address the shortcomings of uncontrolled charging, using two realistic feeder models to test and validate the proposed approach. Probabilistic studies are carried out on these two feeders, based on Monte Carlo Simulations (MCS), to account for the uncertainty in customers' driving patterns reflected in the initial PEV state-of-charge (SOC) and charging starting time. The thesis also presents mathematical models for price-responsive and controllable loads to study for the first time the smart operation of unbalanced distribution systems with these types of smart loads, based on the previously proposed DOPF model. The price-responsive load models are represented using linear and exponential functions of the price, while a constant energy load model, controllable by the LDC, is proposed to model critical and deferrable loads. The effect of feeder peak demand constraints on the controllable loads is also examined, based on the results obtained for two realistic feeder models. The two feeders are also used to study, using MCS, the variability of elasticity parameters and their impact on the output of the DOPF. Finally, the thesis presents a load model of an EHMS residential micro-hub using neural networks (NN), based on measured and simulated data. The inputs of the NN are weather, Time-of-Use (TOU) tariffs, time, and a peak demand cap imposed by the LDC. Various NN structures are trained, tested, validated, and compared to obtain the best fit for the given data. The developed function can be readily applied to the proposed DOPF for real-time optimal operation and control of LDC distribution feeders in smart grids.