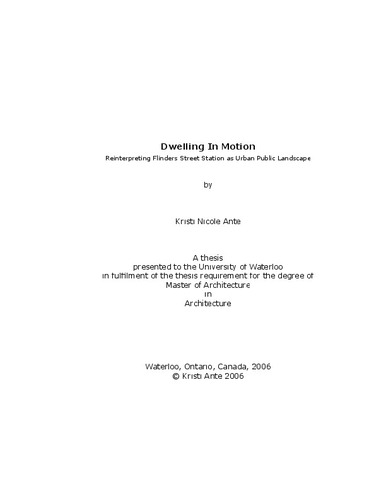 Flinders Street Station in Melbourne, Australia currently serves a dual purpose, providing both a transient space that links the city to its suburban roots and creating a physical barrier between the city and its watercourse. Ultimately, the existing station denies Melbourne the fulfillment of its need for centrality. Historically, the Yarra River was a source of life and sacred feature of the Australian Aboriginal landscape. A renewed interest in the riverfront as the new focus for Melbourne, an emerging global city, has turned the area into an urban destination following years of neglect. Flinders Station stands at the new centre of Melbourne on the North Banks of the Yarra River. The geographical isolation and entrenched suburban nature of Melbourne has led to the celebration of train travel as a cultural phenomenon. Twice daily Flinders Station filters Melbourne's commuters en route between the city and suburbia. The integration of a new public space as a commuter thoroughfare into the existing rail station introduces a transitory space between the disconnected urban/suburban landscapes of the commuter experience. The train station is seen as a fascinating place of cultural significance where the world of fast movement is intermittently juxtaposed with that of dwelling and leisure. This thesis redesigns Flinders Street Station, filtering travelers through a new public landscape to activate the connection between city, river, and suburbia while heightening the sense of urban arrival and departure.