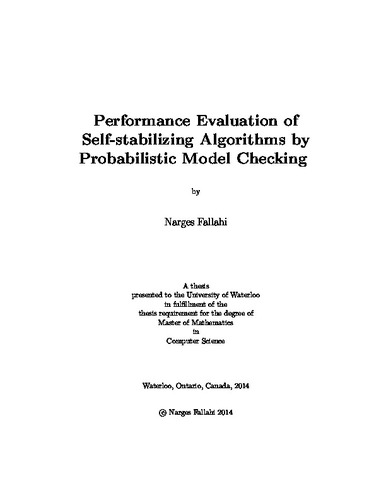 A self-stabilizing protocol is one that starting from any arbitrary initial state recovers to legitimate states in a finite number of steps, and once it stabilizes to a set of legitimate states, it remains there unless it is perturbed by transient faults. The traditional methods existing for performance evaluation of a self-stabilizing algorithm usually work based on the analysis of worst case computational complexity. Another method that has been commonly used in evaluating these algorithms is simulation, which assumes the system starts from an initial state. Here, it is argued that the traditional methods have shortcomings and do not give enough insight about the behavior of the system. Moreover, they do not provide a decent method of comparison. We propose a novel method for evaluation of self-stabilizing algorithms. This method works based on probabilistic model checking and computation of the expected number of recovery steps. We execute some experiments on the case studies, and the results indicate that we can gain insight about the faults and their structure in the protocol. Next, we explain the difficulty of designing a self-stabilizing algorithm for a system and show how it is impossible to do so for some classes of protocols. This resulted in some relaxation in the definition of self-stabilization. One of the relaxations made in the definition of self-stabilization is weak-stabilization. A weak-stabilizing protocol ensures the existence of a recovery path from an arbitrary initial configuration. Thus, some paths may contain connected components or cycles. Since a weak-stabilizing algorithm may get stuck in connected components forever, we cannot evaluate weak-stabilizing protocols by traditional and existing methods. We calculate the expected number of recovery steps for evaluating weak-stabilization. However, since it does not give us enough intuition about the structure of faults, we apply a graph-theoretic formula for estimating the weak-stabilizing algorithm's performance. This formula is based on the number of cycles and their reachability. Based on the observations we made by performance evaluation of these protocols, we suggest algorithms called state encoding for modifying the performance of the algorithms. State encoding works based on changing the bit mapping of the states of the system. The aim is to make the states with faster recovery steps more probable to occur. There are three algorithms, one of which works based on betweenness centrality which is a measure of centrality of a node within a graph. The other one works based on feedback arc set which is a set of arcs whose removal makes a graph acyclic. The third algorithm works based on the length of the shortest recovery path for the states. The other problem investigated here is the problem of state space explosion in model checking. Similar to traditional methods of model checking, probabilistic model checking also suffers from the problem of state space explosion, i.e., the number of states grows exponentially in terms of the number of components in the distributed system. Abstraction methods, which are described briefly here, are designed to combat this problem. We argue that they are not effcient enough, and there is still the lack of a suffcient abstraction method that works for systems with an arbitrary number of processes. We also propose a new approach for evaluation of an abstraction function. Then, based on the intuition gained, a new abstraction algorithm is proposed that is exclusively designed for verification of reachability properties. After executing experiments on a case study, we compare the result of our algorithm with the results obtained by existing methods. The results support our claim that our method is more effcient and precise.