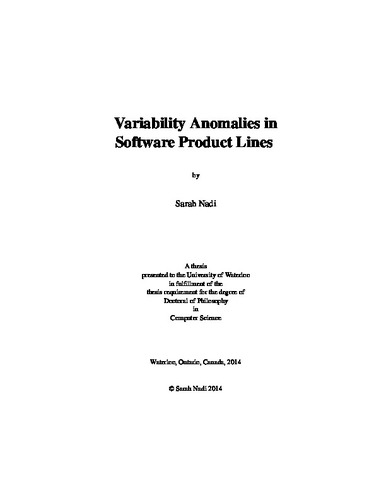 Software Product Lines (SPLs) allow variants of a software system to be generated based on the configuration selected by the user. In this thesis, we focus on C based software systems with build-time variability using a build system and C preprocessor. Such systems usually consist of a configuration space, a code space, and a build space. The configuration space describes the features that the user can select and any configuration constraints between them. The features and the constraints between them are commonly documented in a variability model. The code and build spaces contain the actual implementation of the system where the former contains the C code files with conditional compilation directives (e.g., #ifdefs), and the latter contains the build scripts with conditionally compiled files. We study the relationship between the three spaces as follows: (1) we detect variability anomalies which arise due to inconsistencies among the three spaces, and (2) we use anomaly detection techniques to automatically extract configuration constraints from the implementation. For (1), we complement previous research which mainly focused on the relationship between the configuration space and code space. We additionally analyze the build space to ensure that the constraints in all three spaces are consistent. We detect inconsistencies, which we call variability anomalies, in particular dead and undead artifacts. Dead artifacts are conditional artifacts which are not included in any valid configuration while undead artifacts are those which are always included. We look for such anomalies at both the code block and source file levels using the Linux kernel as a case study. Our work shows that almost half the configurable features are only used to control source file compilation in Linux’s build system, KBUILD . We analyze KBUILD to extract file presence conditions which determine under which feature combinations is each file compiled. We show that by considering the build system, we can detect an additional 20% variability anomalies on the code block level when compared to only using the configuration and code spaces. Our work also shows that file level anomalies occur less frequently than block level ones. We analyze the evolution of the detected anomalies and identify some of their causes and fixes. For (2), we develop novel analyses to automatically extract configuration constraints from implementation and compare them to those in existing variability models. We rely on two means of detecting variability anomalies: (a) conditional build-time errors and (b) detecting under which conditions a feature has an effect on the compiled code (to avoid duplicate variants). We apply this to four real-world systems: uClibc, BusyBox, eCos, and the Linux kernel. We show that our extraction is 93% and 77% accurate respectively for the two means we use and that we can recover 19 % of the existing variability-model constraints using our approach. We qualitatively investigate the non-recovered constraints and find that many of them stem from domain knowledge. For systems with existing variability models, understanding where each constraint comes from can aid in traceability between the code and the model which can help in debugging conflicts. More importantly, in systems which do not have a formal variability model, automatically extracting constraints from code provides the basis for reverse engineering a variability model. Overall, we provide tools and techniques to help maintain and create software product lines. Our work helps to ensure the consistency of variability constraints scattered across SPLs and provides tools to help reverse engineer variability models.