Effects of a Non-Condensable Gas on the Vapex Process 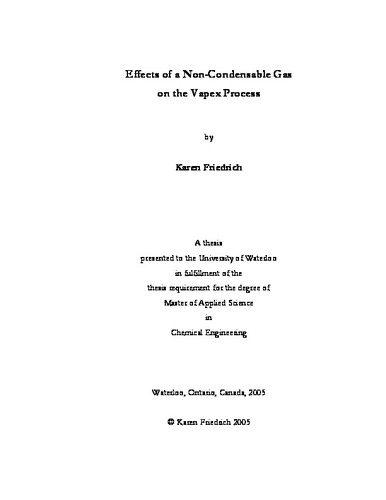 It is estimated that Canada has 1. 7 trillion barrels of oil contained in oil sands located mainly in Alberta. However, the oil contained in the oil sands is a very viscous, tar-like substance that does not flow on its own and cannot be produced with conventional methods. Economical production of this vast resource requires new technology and research. Research in Canada has helped maintain leadership in heavy oil recovery technology. <br /><br /> One method of viscosity reduction is through dilution, which is controlled by two mechanisms&mdash;mass transfer and gravity drainage. In the vapour extraction (Vapex) process, vapour of a light hydrocarbon solvent is injected into the reservoir. The mass transfer of vapour into bitumen is driven by a concentration gradient; the vapour diffuses into the heavy oil, causing a reduction in viscosity. The viscosity reduced oil is referred to as "live oil" and is now able to flow by gravity to a horizontal production well. At the surface, solvent can be easily separated and recovered from the produced oil through a flash separation/distillation process. <br /><br /> Under reservoir conditions, extraction solvents such as butane and pentane would condense, increasing the amount of solvent required and decreasing the density difference between solvent and bitumen. The solvent can be maintained in a gaseous phase, by co-injecting a non-condensable gas (NCG), reducing the partial pressure of the solvent and thus preventing condensation. Two types of models were used to observe the VAPEX process while varying the concentration of air and pentane in the system. Experimental results will help to determine the effect of increasing NCG concentration on the rate of live oil production. <br /><br /> The apparatus consists of a porous media model saturated with bitumen and placed inside acrylic housing. NCG (air) exists in the housing before liquid pentane is added. Pentane vapour continuously evolves from a reservoir of liquid pentane, maintained at constant temperature. A concentration gradient was established allowing pentane to flow into the system where the partial pressure of pentane in the bitumen phase is lower than the vapour pressure of pentane. The bitumen, diluted at the bitumen-gas interface, drains under the action of gravity. The advancement of the bitumen-gas interface was monitored to determine the live oil production rate. By varying the temperature of liquid pentane, the partial pressure of pentane in the extraction vessel was varied. <br /><br /> Results from five experiments in trough models and two in micromodels show that the rate of interface advancement in the presence of a NCG is proportional to the square root of time. Similarly, cumulative volume of oil produced was proportional to the square root of time. Previous works [Ramakrishnan (2003), James (2003), Oduntan, (2001)] have shown that interface advancement and production using a pure solvent was proportional to time. In the experimental range examined (24-32°C) temperature did not effect the rate of production for a given time or interface location. <br /><br /> The average steady state effective diffusion coefficient was calculated from production data to be 0. 116 cm<sup>2</sup>/s, five times larger than estimated from the Hirschfelder Equation. <br /><br /> Live oil properties were found to be consistent throughout each experiment and between experiments. On average, live oil contained 46-48 wt% pentane and viscosity was reduced by four orders of magnitude from 23,000 mPa?s to 4-6 mPa?s.