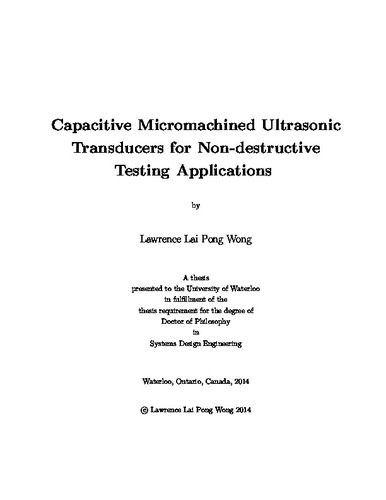 Ultrasound is a popular technique for industrial non-destructive testing (NDT) applications. By sending ultrasonic waves into an object and observing the amplitude and the delay of the reflected or transmitted waves, one can characterize the material, measure the thickness of the object, and detect discontinuities (flaws) as well as the size, location, and orientation of the defects in the object. Traditionally, ultrasonic transducers for NDT are made with piezoelectric crystals. Meanwhile, another class of ultrasonic transducers known as capacitive micromachined ultrasonic transducers (CMUTs) have become popular in medical ultrasound research because of their large bandwidths and other attributes that allow them to be integrated into the tip of a catheter. However, CMUTs have not been widely adopted in ultrasonic NDT applications. In this thesis, three important CMUTs characteristics that could potentially make them attractive for NDT applications are introduced and demonstrated. First, CMUTs can be beneficial to NDT because the fabrication techniques of CMUTs can easily be used to implement high-frequency, high-density phased arrays, which are essential for high resolution scanning. Surface scanning using a 2-D row-column addressed CMUT array was demonstrated. Secondly, CMUTs can be integrated with supporting microelectronic circuits, thus one can implement a highly integrated transducer system, which can be useful in structural health monitoring NDT applications. Front-end microelectronic circuits that include a transmit pulser and a receive amplifier were designed, tested, and characterized. Thirdly, CMUTs are suitable for air-coupled applications because of their low acoustic impedance at resonance. Air-coupled CMUTs fabricated in a standard RF-MEMS process were characterized and tested. This thesis concludes with an analysis of the potential usefulness of CMUTs for ultrasonic NDT. While many ultrasonic NDT applications are better off being performed using conventional piezoelectric transducers, CMUTs can and should be used in certain NDT applications that can take advantage of the beneficial characteristics of this exciting transducer technology.