The Instability of Mesoscale Jets in Idealized Two-Layer Models 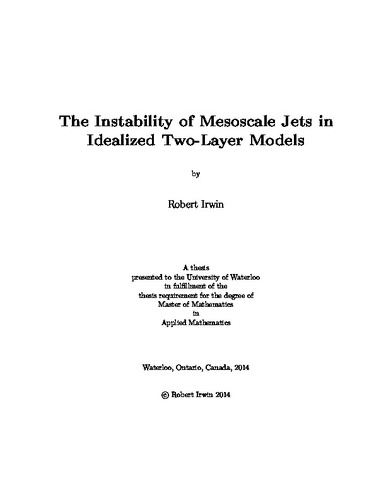 The rotating shallow water (RSW) equations have been used extensively in oceanographic literature to model dynamical elements of the world’s oceans and atmosphere at large scales. The RSW model is a simple and useful model of geophysical fluids because it allows for the consideration of rotation, topography, and, by adding layers, the effects of stratification. In this thesis, the RSW model will be used to investigate the instability of two-layer, mesoscale, Bickley jets. Several different jet configurations will be used to accentuate different types of instabilities in the flow. The two primary instabilities investigated are barotropic (BT) and baroclinic (BC) instabilities, and the classical models of these two instabilities will be discussed. In addition to the RSW model, a piecewise constant potential vorticity (PV) quasi-geostrophic (QG) model will also be introduced. This QG model is more restrictive than the RSW model because it does not admit steep topography, nor does it describe flows of length-scales much different than the Rossby radius of deformation. However, because the model is simpler, it is more efficient to use to explore parameter space. In this thesis, the RSW and QG models will be used in tandem to describe stability characteristics of mesoscale jets over a wide parameter space in both the linear and nonlinear regimes. Finally the effects of stratification and rotation, and the effects of shelflike topography on mesoscale jets will be addressed.