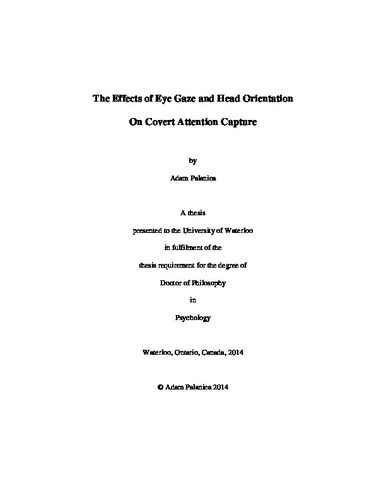 The direction of someone’s eye gaze plays a fundamental role during social interactions and may function to capture and engage attention in the environment. Research has shown that direct eye gaze can preferentially attract visuospatial attention compared to averted gaze, while other research has shown that the congruency between head orientation and gaze direction plays a central role in determining where a person is looking. The majority of previous research examining the perception of gaze direction has predominantly measured overt attention, either through visual search paradigms, or other gaze judgment tasks when targets are directly fixated. However, it is unknown whether gaze direction can be accurately discriminated using covert attention, when stimuli are located outside the focus of attention. This thesis presents a series of studies examining whether and to what extent gaze direction and head orientation capture covert attention in the periphery. Chapter 2 contained four experiments examining gaze detection in the horizontal periphery. Individual faces with a direct- or an averted gaze were flashed for 150 ms across various horizontal eccentricities along the visual field while participants judged whether the face was looking straight or to the side. Fixation on a centred cross was enforced using an eye-tracker, ensuring the use of covert attention. Gaze detection speed and accuracy varied with stimulus type and eccentricity. Accurate gaze detection was achieved all the way to ±10.5° eccentricity when face photographs were highly symmetrical and controlled for visual contrast and luminance (Experiment 1a), but only to ±4.5° eccentricity when using natural face photographs (Experiments 1b, 1c, and 1d). By ±3º of eccentricity, head orientation started biasing gaze judgments, and this bias increased with eccentricity so that beyond central vision gaze judgment was primarily made on the basis of head orientation. However, when presented at the fovea, direct gaze was generally detected faster than averted gaze. Results also suggested a facilitated processing of frontal heads with direct gaze in both central and peripheral vision. Chapter 3 contained three experiments that examined gaze detection in the vertical periphery. These experiments used the same paradigm as in Chapter 2, except with presenting stimuli across various vertical eccentricities (only natural face photographs were used). Gaze was detected above chance level up to ±3° eccentricity when using frontal heads (Experiment 2a), but over ±6° eccentricity when using deviated heads (Experiment 2b); Experiment 2b also showed that head orientation did not play a strong role in biasing gaze judgments. However, it was demonstrated that, beyond foveal vision, head orientation influenced gaze judgments when both head orientations were tested together (Experiment 2c), and that gaze was discriminated accurately only within central vision (~3°-4.5° eccentricity). Again, there was a special processing of frontal heads with direct gaze. Chapter 4 contained two experiments that investigated how gaze direction and head orientation influenced attention capture using an inhibition of return (IOR) spatial cueing paradigm. Target response time (RT) was measured after the presentation of a stimulus cue (150 ms situated 4.5° horizontally to either left or right of fixation), which was either a face (with direct- or averted gaze) or a house (control). Participants fixated on a centred cross at all times and responded via button press to a peripheral target after a variable stimulus onset asynchrony (SOA) from the stimulus cue. At the shortest SOA (150 ms), RTs were shorter for faces than houses, independent of an IOR response, suggesting a priming effect elicited by faces. At the longest SOA (2400 ms), a larger IOR magnitude was found for faces compared to houses. Both the priming effect and later IOR responses were modulated by gaze-head congruency; these effects were strongest for direct gaze faces with frontal heads (Experiment 3a), and for averted gaze faces with deviated heads (Experiment 3b). Overall, the series of studies in this thesis indicate that gaze direction and head orientation can be powerful social cues for capturing and engaging attention, and both contribute to gaze detection in the environment, but their roles differ with eccentricity.