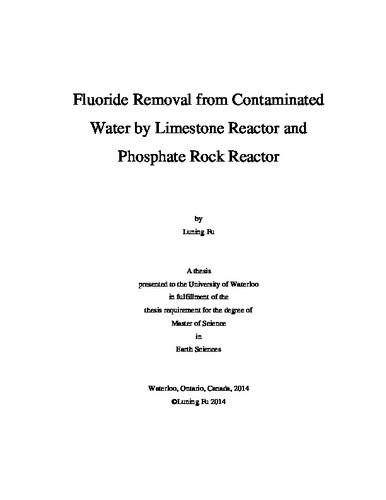 Fluorosis, which results in mottling of teeth enamel, softening of bones, ossification of tendons and ligaments, and even neurologic damage, is endemic in many mid-latitude regions. It is caused by the long-term ingestion of high fluoride (F) drinking water, and the World Health Organization (WHO) recommends that drinking water have fluoride concentrations < 1.5 mg/L. The most common technologies to remove fluoride from wastewaters are precipitation and sorption. The sorption methods are more effective in reducing fluoride concentration than precipitation methods. However, they typically require initial high setup costs and supervision. Therefore, the development of a simple, passive and inexpensive technology to reduce fluoride concentrations in waters to recommended drinking water limits is of significant benefit to communities affected by fluorosis world-wide. Three reactors were developed in this research and the fluoride removal efficiencies were evaluated. The first reactor was composed of two columns of limestone granules and one column of calcium citrate powder. This reactor was developed based on a cost-effective reactor developed by Reardon and Wang, which is composed of two columns of limestone gravel. The reactor functions by adding carbon dioxide to inflowing water, which forces calcite (CaCO3) to dissolve and thus fluorite (CaF2) to precipitate in the first column. The exiting water then degasses by unsaturated flow through the second column of limestone gravel which results in a precipitation of the calcite that dissolved in the first column. In this study, a column containing quartz sand/calcium citrate mixture was introduced and connected between the original two columns. Citrate and additional calcium ions were brought into the solution through saturated flow. The feedwater then entered the second column of limestone gravel, where citrate promoted the incorporation of fluoride ions into calcite. This study examines the known role of citrate ion to induce fluoride ion to co-precipitate in calcite, and evaluates its effectiveness to improve the passive, two-column reactor of Reardon and Wang to attain drinking water quality fluoride concentrations. The results of this study indicate that the limestone reactor designed in this study reduced fluoride concentration from up to 150 mg/L to below the maximum contaminant level (4 mg/L) at the residence time of 4 h. When the residence time was 24 h, fluoride concentration was reduced to below the drinking water standard (1.5 mg/L). This fluoride removal efficiency was higher than with the limestone reactor of Reardon and Wang (by a further reduction of 1.19 mg/L fluoride in total) yet still lower than the predicted efficiency. One important reason of the lower fluoride removal efficiency than with prediction is that the citrate ions suppressed the precipitation of calcite. In addition, a short residence time of the experiment decreased the removal efficiency of the limestone reactor and a longer residence time results in high removal efficiency. An improvement to this reactor was to inject a slurry containing CaF2 into the upper port of the first column, which further decreased fluoride concentration by 0.420 mg/L. The second reactor was composed of two columns of dolomite granules and one column of calcium citrate powder. The results in the dolomite reactor experiments indicate that this reactor was only able to reduce the fluoride concentration to 4.30 mg/L at a residence time of 4 h. The three main reasons are the slow dissolution rate of dolomite, negative effect of magnesium on the precipitation of fluorite in column 1 and suppression effect of citrate on precipitation of calcite in column 2. However, the present of magnesium promoted more fluoride to co-precipitate in fluorite in column 2 than that in a limestone reactor. Accurate determination of the fluoride concentration is critical in this research. Three commonly used fluoride determination techniques including SPADNS, IC and fluoride electrode methods were investigated on their sensitivities and interference from citrate. The results indicate that citrate has a significant interference on the SPADNS method, and the addition of a pH buffer does not eliminate the interference. In addition, citrate has a minor effect on the determination of fluoride using fluoride electrode and no effect on using IC method, since the peaks of the fluoride and citrate were well separated. However, the running time is long for each sample with IC analysis, and the cost is much higher than with the fluoride electrode method. Consequently, fluoride electrode method was used throughout this research for determination of fluoride. The third reactor was a single column of crushed phosphate rock from four sources: Carbonatite, Tennessee Brown, and two types of PSP with different particle sizes. Each of these materials was assessed as treatment options for fluoride. From mineralogical analysis, the results indicate that the major active mineral compositions among the four tested phosphate rocks are calcite, apatite and quartz. The results indicate that PSP rock, which contains the highest percentage of hydroxyapatite, is the best choice for fluoride remediation among the four. It can reduce fluoride concentration from 10 mg/L to 1.5 mg/L for up to 120 pore volumes. However, after 120 pore volumes the fluoride concentration continuously increased with adsorption sites becoming saturated over time. This outcome indicates a mechanism of adsorption rather than precipitation. The results from batch tests also provide evidence that adsorption contributed much more than precipitation for removal of fluoride. Future work should be devoted to improvement of the removal efficiency of the limestone/ dolomite reactor: one is to evaluate a single reactor incorporating both calcite and dolomite with a reasonable ratio of the two minerals, and the other is to consider and assess organic ligands other than citrate to more efficiently promote the incorporation of fluoride in calcite precipitates. In addition, future work should be done on improving the fluoride removal ability of the phosphate rocks. Investigation should be done on understanding the dissolution process of the calcite and apatite within the phosphate rocks in the columns, and methods should be developed to simulate the precipitation of fluorite in the columns of the reactor. Constant monitoring of the heavy metals in the effluent from the reactor is also recommended.