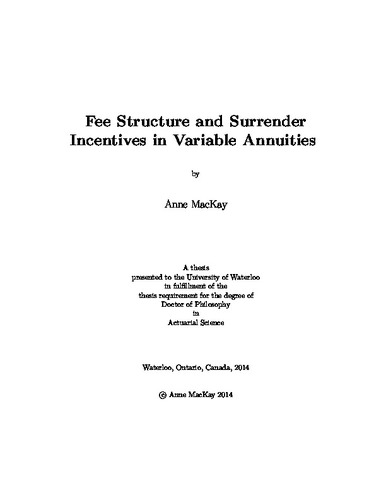 Variable annuities (VAs) are investment products similar to mutual funds, but they also protect policyholders against poor market performance and other risks. They have become very popular in the past twenty years, and the guarantees they offer have grown increasingly complex. Variable annuities, also called segregated funds in Canada, can represent a challenge for insurers in terms of pricing, hedging and risk management. Simple financial guarantees expose the insurer to a variety of risks, ranging from poor market performance to changes in mortality rates and unexpected lapses. Most guarantees included in VA contracts are financed by a fixed fee, paid regularly as a fixed percentage of the value of the VA account. This fee structure is not ideal from a risk management perspective since the resulting amount paid out of the fund increases as most guarantees lose their value. In fact, when the account value increases, most financial guarantees fall out of the money, while the fixed percentage fee rate causes the fee amount to grow. The fixed fee rate can also become an incentive to surrender the variable annuity contract, since the policyholder pays more when the value of the guarantee is low. This incentive deserves our attention because unexpected surrenders have been shown to be an important component of the risk faced by insurers that sell variable annuities (see Kling, Ruez and Russ (2014) ). For this reason, it is important that the surrender behaviour be taken into account when developing a risk management strategy for variable annuity contracts. However, this behaviour can be hard to model. In this thesis, we analyse the surrender incentive caused by the fixed percentage fee rate and explore different fee structures that reduce the incentive to optimally surrender variable annuity contracts. We introduce a "state-dependent" fee, paid only when the VA account value is below a certain threshold. Integral representations are presented for the price of different guarantees under the state-dependent fee structure, and partial differential equations are solved numerically to analyse the resulting impact on the surrender incentive. From a theoretical point of view, we study certain conditions that eliminate the incentive to surrender the VA contract optimally. We show that the fee structure can be modified to design contracts whose optimal hedging strategy is simpler and robust to different surrender behaviours. The last part of this thesis analyzes a different problem. Group self-annuitization schemes are similar to life annuities, but part, or all, of the investment and longevity risk is borne by the annuitant through periodic adjustments to annuity payments. While they may decrease the price of the annuity, these adjustments increase the volatility of the payment patterns, making the product risky for the annuitant. In the last chapter of this thesis, we analyse optimal investment strategies in the presence of group self-annuitization schemes. We show that the optimal strategies obtained by maximizing the utility of the retiree's consumption may not be optimal when they are analysed using different metrics.