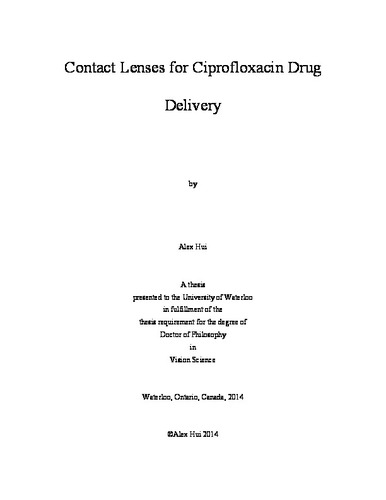 PURPOSE The purpose of this thesis was to evaluate the potential of contact lenses as ciprofloxacin drug delivery devices. METHODS Investigations into ciprofloxacin uptake and release characteristics, and the possibility of their eventual clinical applications were elucidated through three broad experiments: • In the first experiment (Chapter 3), the uptake and release characteristics of commercially available contact lenses, both hydrogels and silicone hydrogels, were examined in vitro. • In the second experiment (Chapter 4), novel contact lens materials were manufactured using a molecular imprinting strategy to modify in vitro ciprofloxacin release characteristics. • In the final experiment (Chapter 5), utilizing the results gleaned from the first two experiments, contact lenses were manufactured using the molecular imprinting strategy. The material properties of the novel lenses were evaluated. The antibacterial activity of these lenses were evaluated both in vitro and in an in vivo rabbit model of microbial keratitis. RESULTS Examination of commercial contact lens materials for their ciprofloxacin delivery potential demonstrated a measurable difference between the different lens types, with the hydrogel lenses taking up more ciprofloxacin and releasing more over time. Silicone hydrogels as a group did not release as much antibiotic as the hydrogels, but neither group of lenses were able to release the antibiotic for any extended periods of time. Novel materials created using a molecular imprinting strategy demonstrated substantial improvements to release times measured in vitro. Some of the materials were able to demonstrate sustained release within the vials for up to two weeks. The molecular imprinting strategy was subsequently applied to contact lenses manufactured in-house, which were shown to have similar contact lens properties to lenses already on the market. Testing of the lenses in vitro and in vivo demonstrated a superior profile in eradicating pathogenic bacteria in models of microbial keratitis. CONCLUSIONS The results from this thesis detail the potential for novel, custom-made contact lenses with extended ciprofloxacin releasing characteristics. These novel lenses may influence or be a part of future treatment paradigms for ocular infections.