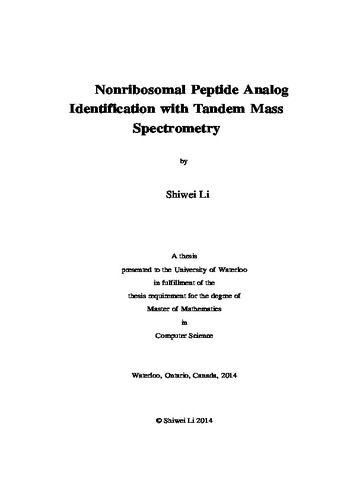 Nonribosomal peptides (NRP) are a class of peptide secondary metabolites, usually produced by microorganisms like bacteria and fungi. NRP antibiotics, cytostatics, and immunosuppressants are in commercial use. In pharmacological studies, novel NRPs are often promising substances for new drug development. To discover novel NRPs with limited resources from microbial fermentations, a significant process is to identify known NRPs and their analogs in an early stage and exclude them from further investigation. This so-called “dereplication” step ensures less resource wasted in the subsequent experiments. Tandem mass spectrometry has been routinely used for NRP dereplication. Other researchers have developed software to identify known NRPs with a database. However, only a rather small part of NRPs are discovered by now and identifying analog of these NRPs is still occupying much resources and hindering the throughput of novel NRP discovery. In this thesis, we review the nature of nonribosomal peptides and investigate the challenges in computationally solving the analog finding problem. After that, a program called NRP Analog Finder is introduced as an automated method to identify NRPs and their analogs with tandem mass spectrometry. It is designed to identify mixtures of NRP compounds from LC-MS/MS of complex extract; find structural analogs that differ from an identified known NRP compound with at most two monomers; localize the modified residues; and determine how much mass is changed at each modification site. NRP analog finder is tested to be an effective tool for mass spectrometry based NRP analog identification.