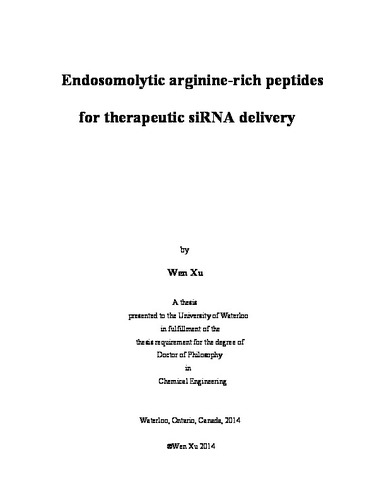 At the forefront of revolutionizing medicine, gene therapy provides an effective way to treat a range of diseases by regulating defective genes at the root of the disease. Short interfering RNA (siRNA) holds great promise as therapeutic agents in this domain. The siRNAs are a class of 20 to 25 nucleotide-long double-stranded RNA molecules that play an important role in the RNA interference (RNAi) pathway. RNA interference is a post transcriptional process triggered by siRNA, which inhibits the expression of a specific gene by the degradation of its complementary messenger RNA (mRNA). Despite its potential value, intracellular delivery remains a major obstacle to clinical applications of therapeutic siRNAs. Its large size and negative charge prevent siRNA molecules from crossing cellular membranes while the sensitivity of naked siRNA to endogenous enzymes makes it vulnerable in serum. To address these problems, several novel strategies are created to achieve an effective and safe mode of delivery. Among them, peptide based drug/gene carriers are emerging as one promising delivery system for safer in vitro and in vivo applications. This thesis focuses on the design, characterization and utilization of novel endosomolytic peptides for siRNA delivery. The studies include the following: (i) the design of new peptide sequences, and modification of existing sequences; (ii) the physicochemical characterization of peptides, and the interaction between peptides and siRNA molecules; (iii) the evaluation of the silencing efficiency, and toxicity of peptides/siRNA complexes in cultured cells and in vivo; (iv) the study of their intracellular pathway, and endosomal release mechanism; (v) the in vitro biocompatibility study of the peptides/siRNA nanocomplexes, and (vi) the co-delivery of anti-cancer drugs and siRNA into cancer cells. The peptide C6, a 18-mer peptide, was first evaluated as an siRNA carrier. C6 contains three types of amino acids: positively charged arginine, hydrophobic leucine and tryptophan. C6 would bind to negatively charged siRNA molecules through electrostatic interaction, whereby a peptide/siRNA molar ratio above 10/1 is needed to neutralize all the negative charges of siRNA molecules, indicated by the agarose gel shift assay. Fluorescence microscopy shows a punctuated distribution of peptide/siRNA complexes. Despite the great intracellular uptake, the silencing efficiency of siRNA delivered by C6 is very low, probably due to the entrapment in the endocytic vesicles. Therefore, modifications by including pore-formation or pH-sensitive moiety to the sequence have been applied to enhance the endosomal escape capability of C6/siRNA complexes. Based on these strategies, a peptide library was generated by modifying prototype peptide C6. All the modifications improved the transfection efficiency of C6 to some degree. After completing the pre-screening for the activity, several promising candidates were used for further evaluations. Aromatic tryptophan residues were used to substitute some leucine residues in the sequence, since tryptophan rich motif is found abundantly in the pore-forming toxins of bacteria. The resulting peptide C6M1 shows increased endosomal membrane disruption ability in acidic environment. In addition, certain residues in C6 were replaced by histidine in the hope that they will facilitate the endosomal escape of peptide/siRNA complexes through the “proton sponge effect.” Selected peptides C6M1, C6M3, and C6M6 could form stable complexes with siRNA. Formed nanoscale complexes are able to deliver siRNA into different cells and induce specific gene knockdown. Effective in vivo RNAi was achieved in a mouse model bearing a subcutaneous tumor. Intratumoral injection of the complexes resulted in a marked reduction of tumor growth through downregulation of antiapoptotic Bcl-2 protein in mice. Furthermore, these complexes were proven safe at transfection concentration by the cytotoxicity, the complement activation, and the cytokines activation assays. These results demonstrate that the C6 family peptides are a potent system for efficient gene delivery in vitro and in vivo. As positive charges and endosomal escape ability both play an important role in promoting the transfection efficiency of siRNA, next the structure-activity relationship of efficient peptide-based siRNA carriers were explored. Here, oligoarginine peptides, prominent members in cell-penetrating peptide family, are rationally modified with oligohistidine and stearyl moieties (STR-). It is found that when the ratio of histidine/arginine in a stearylated peptide sequence is >1.5, pronounced GAPDH gene silencing is induced in a range of cell lines. Among these peptides, STR-HnR8 (n>12) showed high knockdown efficiency, which was rarely reported before. The main endosomal escape mechenism of stearylated and oligohistidylated oligoarginine/siRNA complexes is determined to be the “proton-sponge” effect. This peptide could also stabilize hydrophobic EPT/HCPT hybrid NPs in water. Co-delivery of EPT/HCPT hybrid NPs and Bcl-2 siRNA into cancer cells achieved a triple synergistic effect by greatly inhibiting cancer cells proliferation. Together, this work suggests a new strategy for the improvement and optimization of CPP-based siRNA delivery systems.