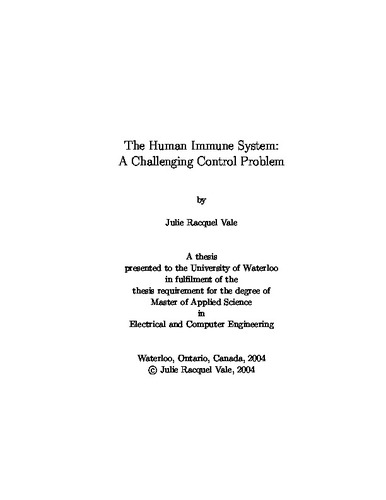 This work deals with the control of the human immune system. A standard immune system model is modified by introducing control signals corresponding to drug cocktail and immune suppressor treatments. The ultimate objective is to use these control signals to 'cure' a chronically-ill patient. Control is challenging for this system due to nonlinearities and time delays. In fact, it is shown that fundamental aspects of the system dynamics are lost when the system is linearised; hence, control approaches involving linearisation are fruitless. Feedback linearisation and some optimal control methods are also investigated and shown to be infeasible. However, it is shown that, for certain parameter values and initial conditions related to the virus and patient, a specific open-loop control scheme using only the drug cocktail achieves the objective. It is also proven that, unfortunately, this control scheme fails for other parameter values and initial conditions. A two-stage open-loop controller that uses both control inputs is then proposed. It is shown in simulation that the two-stage controller works over a larger set of parameters and initial conditions than the single-stage controller, but a rigorous analysis of the two-stage controller remains elusive.