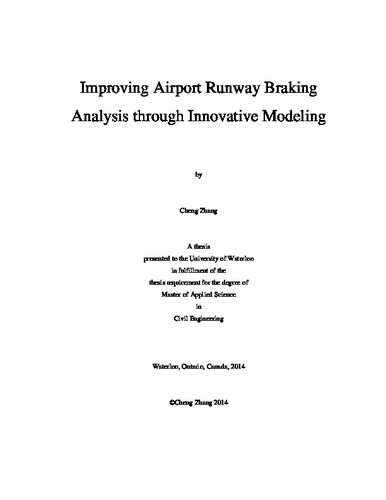 Landing excursion accidents have become a major concern over recent decades regarding airline and airport safety. Available runway friction has a significant impact on aircraft landing performance. This is especially noted when aircraft are landing on wet or otherwise contaminated runways due to the reduced braking action, which has been well documented since the dawn of the jet aircraft age. The objective of this thesis is to develop a tool to help make recommendations for airports that are subjected to diverse weather conditions. In order to model an aircraft’s real landing performance, a mechanistic-empirical aircraft deceleration equation was developed. This equation contains all of the major forces that contribute to aircraft braking, and is calibrated and validated using digital flight data from dry runway aircraft landings. Digital flight data from a Boeing 737-700, runway pavement condition monitoring data, and weather data was collected. Finally, a Boeing 737-700 case study was conducted. As a result, it is able to back calculate the braking friction coefficient from the developed equation and evaluate the impact of wet and contaminated runways on aircraft braking performance. A study of a Boeing 737-700 aircraft landing performance on runways under different conditions was conducted. A mechanistic-empirical landing distance model is established based on the mechanistic-empirical deceleration equation, in order to accurately calculate the required landing distance. When developing the landing distance model, the following characteristics are considered: pilot settings (TLA, spoiler position, and flap position configurations), aircraft operational characteristics (touchdown speed and weight), the runway friction condition, and aircraft braking system characteristics. A Boeing 737-700 real data case study was conducted and a comparison was made with the Boeing 737 Quick Reference Handbook reference landing distance. The results indicate the model offers an accurate prediction of aircraft landing distance. Finally, future applications of this thesis are introduced. The potential of the development of a runway assessment, evaluation, and reporting framework was proposed. Opportunities of applying this thesis in on-board landing distance calculation, quick exit taxiway design and airport operation optimization, and fuel consumption reduction were presented. Moreover, the development of the Braking Availability Tester was discussed.