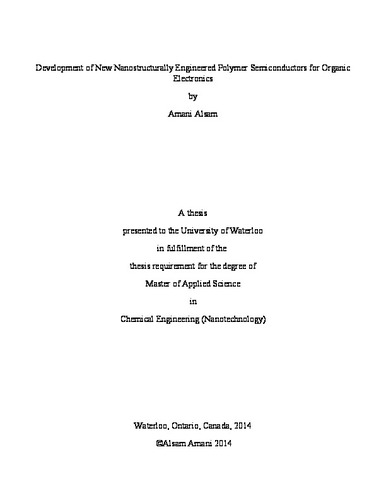 The research presented in this thesis was focused on organic semiconductors and has resulted in the development of novel printable polymer semiconductors that can be used in organic thin film transistors (OTFTs) and organic photovoltaics (OPVs), or solar cells. Polymers used in OTFT applications must have particular characteristics, such as a highly ordered or crystalline structure, favoured molecular orientation, and appropriate energy levels for either hole transport (p-type semiconductors) or electron transport (n-type semiconductors). Achieving these properties requires control of the design and synthesis of the polymers through the choice of appropriate building blocks and side chain substituents. In contrast, for OPV applications, the band gap, thin film morphology, and balance of the donor’s hole mobility and the acceptor’s electron mobility must be finely tuned for optimal photovoltaic performance. The specific focus of the research was on a new type of donor-acceptor copolymers that have alternating electron-accepting azo units and common electron donor units (e.g., thiophene). These polymers are expected to have strong intermolecular interactions due to the donor-acceptor effect, which could lead to improved molecular organization for efficient charge carrier transport in OTFT devices. The donor-acceptor effect also creates narrow band gap polymers, which are preferred for optimum light harvesting. The polymer materials developed in this research are evaluated as channel semiconductors in OTFTs and can also be used as donors in polymer solar cells. Zs discovery of which complemented previous work conducted by the same research group. These innovative building blocks would be valuable in numerous applications, including OTFTs and OPVs. Five polymers have been created, three of which show the most promising potential for OTFT and OPV applications: P1-DTA-BTV, P5-DTAE-BT, and P6-DTAE-TT. All of these copolymers have been synthesized via Stille coupling reaction. The first copolymer, P1-DTA-BTV, which exhibits a small band gap of 1.13 eV, with HOMO and LUMO energy levels of -5.21 eV and - 4.08 eV, respectively, is suitable for both OTFT devices and OPV applications. P5-DTAE-BT and P6-DTAE-TT, on the other hand, are characterized by broader band gaps of 1.29 eV and 1.32 eV, respectively, and their average HOMO and LUMO energy levels are -5.43 eV, -4.20 eV, and -5.40 eV, -4.00 eV, respectively. It has been experimentally demonstrated that the presence of an ester group in the (E)-1,2-di(thiazol-2-yl)diazene DTA monomer helps lower the LUMO energy level, creating the broad band gap revealed in the (E)-bis(2-octyldodecyl) 2,2'-(diazene-1,2-diyl)bis(thiazole-4-carboxylate) DTAE copolymer results, and making the P5-DTAE-BT D-A copolymer an n-type semiconductor, which is very useful for the applications mentioned above. The polymers were characterized by Differential Scanning Calorimetry DSC, Thermal Gravimetric Analysis TGA, Ultraviolet-Visible Spectrometry UV-Vis, Cyclic Voltammetry CV, Atomic Force Microscopy AFM, X-Ray Diffraction XRD.